Size1L Proof63.6 (31.8% ABV)
Fluid Dynamics barrel age their ready-to-drink cocktails, mellowing out the spirits within. In the case of the Brandy Manhattan, it's Germain-Robin brandy and Quady Vya sweet vermouth. Add a dash of bitters and some ice for the perfect drink.
Notify me when this product is back in stock. 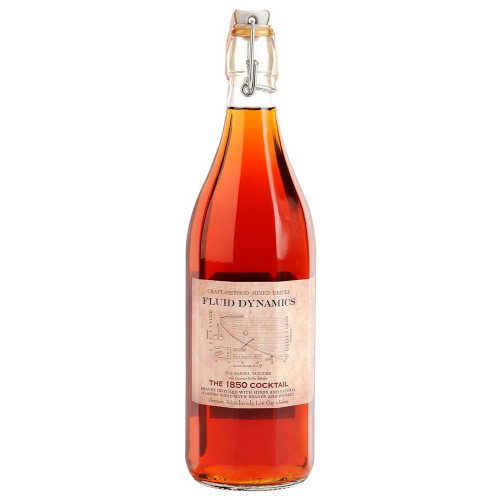 Master distiller Crispin Cain is a seasoned wine industry veteran. In 1983 he was moonlighting jobs in Pleasanton in a wine cellar, and on a bottling line, while working with Cooper Laboratories plasma kinetics division, during the day.

Cain has proved to be quite the wizard on the still, known for delivering award-winning spirits, Cain has been working with spirits for many many years. His son, Devin Cain, is also a spirits maven, having apprenticed under his father his blending skills are quite exquisite.

The Fluid Dynamics range is comprised of barrel-aged cocktails made from craft-method spirits. This barrel-aged Brandy Manhattan is produced at Cain’s Tamar Distillery using Germain-Robin brandy and Quady Vya sweet vermouth. As bitters tend to overpower the cocktail if added at bottling, they have left them out. Add a dash along with ice when serving this cocktail to make the most out of it!

It's a nicely balanced profile with a soft, fruity nose that has dark fruit notes with the brandy and vermouth shining brightly. Add a dash of bitters and some ice to really make it perfect.