Size750mL Proof93 (46.5% ABV)
This bourbon, which is made from locally-sourced grains in the Midwest, earned a Gold Medal from the Beverage Testing Institute.
Notify me when this product is back in stock. 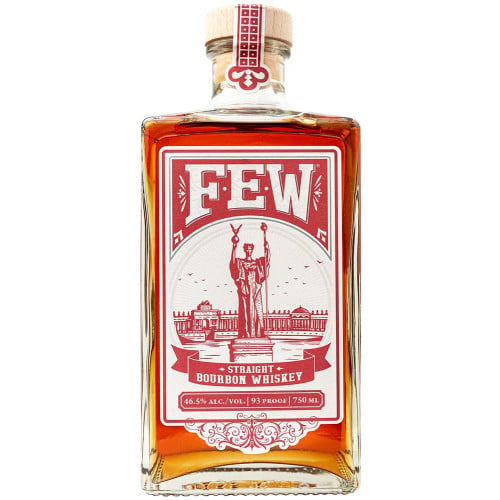 As a result, Evanston remained a dry town for over 100 years. It wasn't until Paul Hletko, owner and master distiller at FEW Spirits, began lobbying the town that the antiquated laws were lifted. "I'm the vice president of the PTA at my kids' school and I coach their soccer and T-ball teams," Hletko says. "People around town know me and what I'm about, which is handy when you're looking to change 100 years of laws."

Today, Hletko and his team of master distillers produce FEW Bourbon Whiskey in the heart of Evanston, Illinois.

FEW Straight Bourbon Whiskey is made from a mash of 70% corn, 20% barley and 10% rye. "The corn comes from a farmers co-op in Indiana and my barley and rye from farmers in Wisconsin," notes Hletko. After mashing and fermenting the grains, Hletko distills the wash through his 1,500-liter Kothe copper-pot still.

After distillation, the bourbon is aged in custom-made oak barrels from Minnesota. "The cooper I eventually chose to make our barrels won 24 out of 25 categories at a spirits competition I visited," Hletko says. "I'm no math major, but that's the cooper I want to make our barrels." The #3 char on the barrels contributes slightly sweet hints of honey and vanilla to FEW Bourbon, which are nicely balanced by a spicy finish that intensifies as it lingers. After aging the bourbon, Hletko and his team of distillers fill and label each bottle by hand.

FEW Straight Bourbon Whiskey earned a Gold Medal from the Beverage Testing Institute and a Silver Medal at the San Francisco World Spirits Competition in 2012.

As one of the leading figures of the Temperance movement, it's unlikely that Frances Elizabeth Willard would approve of Hletko's success or the name he chose for his distillery, which is sometimes written as F.E.W. Spirits.

"People say she's rolling over in her grave,” Hletko says with a coy smile. "I wouldn't know about that — the name is just a coincidence."

Aroma of honeysuckle, clove and chocolate orange, which gives way to cherry, vanilla and caramel on the palate. The finish is noticeably spicy, with cinnamon and white pepper notes providing a lasting finish.