Be the first to review this product
Bottled at 100 proof and aged at least 4 years, this bourbon is smooth and warm with notes of caramel, vanilla, oak, and citrus. It has won the coveted Double Gold Medal at the 2021 edition of the San Francisco World Spirits Competition.
$24.99
Add to Wish List

Heaven Hill distillery was founded in 1935, Immediately after Prohibition ended in the United States in 1933, after a group of investors decided to be ready for the rebounding market. The investors including the famous Joseph L. Beam. Heaven Hill is located on a massive estate boasting 22 multi-story rick-houses across hundreds of acres of land. Now known as the "Heaven Hill Bernheim Distillery" they have the second-largest inventory of Bourbon Whiskey in the world. It is also the only remaining family-owned distillery in Kentucky.

Evan Williams has a diverse core lineup, including their very popular signature Black Label, flavored expressions, as well as some limited releases. Every year since 1983 Master Distiller Parker Beam (and now his son Craig) have chosen select barrels for their single barrel series, barrels selected to their exact specifications.

Evan Williams Bottled-in-Bond is a 100-proof version of their Kentucky straight bourbon whiskey. Beside being 100 proof, BiB means it has spent at least 4 years in barrels and is distilled during one season at one distillery. Smooth with the warmth expected of its proof and delicious caramel, vanilla, oak, and citrus notes, the expression has won the coveted Double Gold Medal at the San Francisco World Spirits Competition in 2021.

Get your bottle of this delicious BiB bourbon today!

The nose has caramel, vanilla, oak, and barley aromas. You'll find citrus, vanilla, and black pepper on the palate, leading to a long, warm, and dry finish with lingering notes. 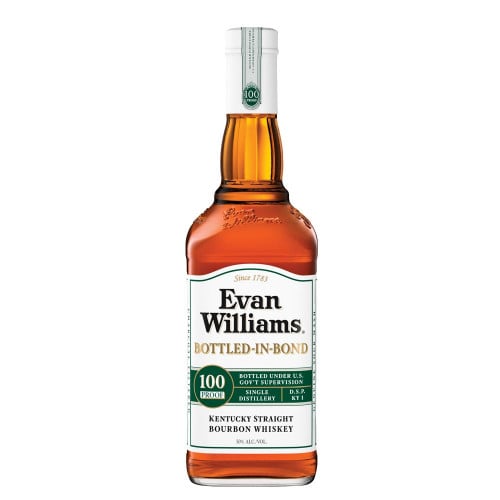