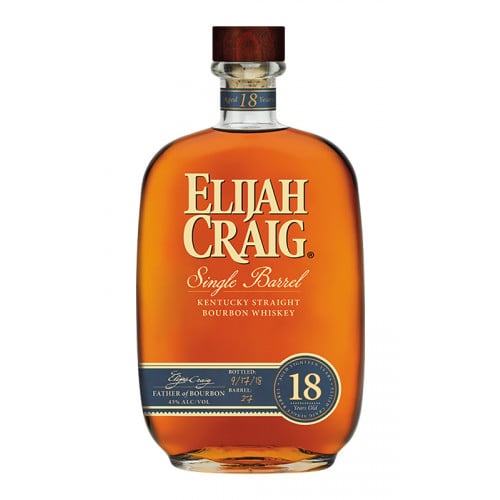 Following the defeat of the British at the Battle of Yorktown during the American Revolutionary War, the territory west of the Appalachian mountains became known as Kentucky County. At the time, the territory was considered part of Virginia and was overseen by a military governor named John J. Bowman. In order to encourage westward expansion, Virginia issued pioneers who agreed to settle in Kentucky County "corn writs," which granted the pioneers 60 acres of land if they agreed to settle in Kentucky and start farming corn.

Elijah Craig Small Batch Kentucky Straight Bourbon Whiskey pays homage to Craig and his unique legacy. The bourbon is bottled from the marriage of fewer than 100 casks of maturing bourbon, each of which is rested in a Kentucky rickhouse for a minimum of a dozen years. The bourbon has an aroma of honey, sweet corn, vanilla, and brown sugar. The aroma gives way to notes of roasted nuts, creamy vanilla, molasses and tropical fruits on the palate, that are well-balanced by hints of dry oak and cinnamon. The finish is long and sweet and ends with a warming touch.

This unique 18-Year-Old bourbon showcases Elijah Craig's Master Distillers' expertise, bottled solely from the contents of one barrel, this expression of bourbon-making craftsmanship is bold and robust. Bourbon for the whiskey connoisseur, this bottle has received countless awards for its smooth yet complex flavor, including 3 Double Gold Medals at the San Francisco World Spirits Competition.

Aged oak, spiced vanilla, with notes of mint and chocolate. Richly textured, nutty, and semisweet. Initial bursts of honey give way to toasted wood and pleasant char. Lively and engaging, then lingers with vanilla and pepper.