Learn more
Size750mL Proof102.2 (51.1% ABV) *Please note that the ABV of this bottle may vary
This rare Dufftown-Glenlivet single malt is a special small batch bottling by Cadenhead’s, featuring notes of soft citrus, and tropical fruits.
Notify me when this product is back in stock. 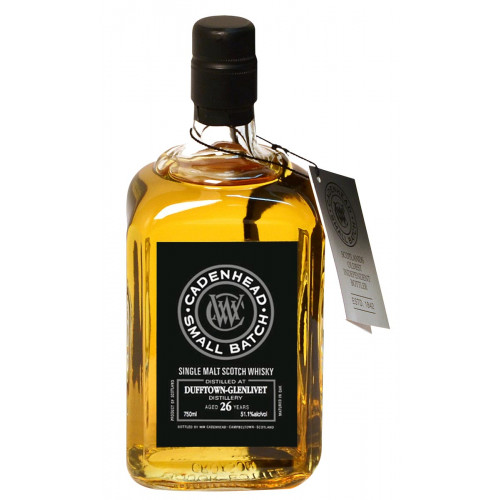 Situated in the Speyside region of Scotland, the Dufftown Distillery was founded in 1895 by four wine merchants who, together, purchased a stone built saw and meal mill and converted into a distillery. Located near the confluence of the Rivers Dullan and Fiddich, the distillery draws its water from Jock's Well, which is renown for its incredibly pure flavorful spring water (on more than one occasion, nearby distilleries — particularly Mortlach — have been caught attempting to divert water from the well to their own distillery).

This Dufftown single malt Scotch whisky was crafted exclusively from malted barley, which was milled and mashed before being fermented in the distillery's wooden washbacks. Following fermentation, the whisky was distilled twice: first through a copper pot wash still and then again through a copper pot spirit still. This single malt was produced during the time Dufftown adopted the Glenlivet moniker.

Established in 1842, Cadenhead’s is Scotland’s oldest independent bottler. The company remained in the same family until 1972, when it was taken over by J. & A. Mitchell & Co. the owners of Springbank Distillery. This whisky was distilled in 1988, and bottled at 51.1% ABV. On the nose it opens up to reveal soft citrus and herbs with a hearty dose of brothy meatiness. The palate leads with spices and tropical fruits that give way to nuts and syrup and the finish is long and pleasant, fading slowly into oak spice. This is a very rare and unique limited bottling.

On the nose; soft citrus and herbs with a decent dose of brothy meatiness. Flavors of spice and tropical fruits that give way to nuts and syrup on the palate. The finish is long and pleasant with nuts, fruits, and brown sugar fading slowly into oak spice.