Size750mL Proof120 (60% ABV)
A bolder version of Dry Fly Classic, this Straight Cask Strength Wheat Whiskey is bottled at 120 proof, although you'd never have guessed it. Aged for over 3 years in new American oak, it's a strong, but sweet expression. 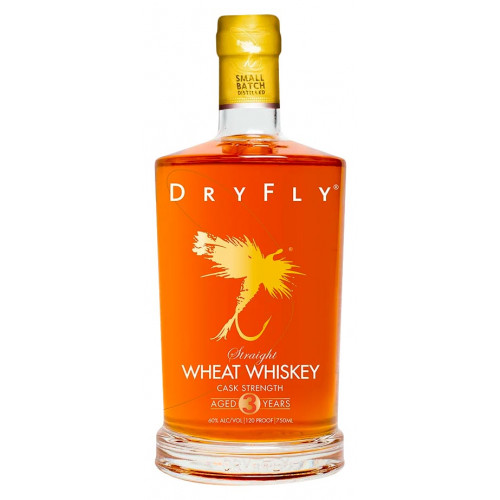 Dry Fly Distilling was founded by Don Poffenroth and Kent Fleischmann, two friends who were inspired to open its doors when they were knee-deep in the Gallatin River during a fly-fishing trip. "It was still early, and the sun was rising slowly behind the alders," says Fleischmann. "It occurred to us how privileged we were to live, work, and fish in one of the most amazing places on Earth. We felt so fortunate that we wanted to find some way to share the natural beauty and purity of the great Northwest."

In 2007, a law amendment allowed craft distilleries to open up in Washington State and Dry Fly was the first distillery to take advantage. They began producing small batch, wheat-based spirits, including gin, vodka, whiskey and bourbon, and while the vodka was the first to start garnering awards, the other spirits didn't followed soon after.

Sustainability is an important value at Dry Fly, a grass to grain distillery, where they make it a priority to source the wheat from sustainable farms no farther than a 30-mile radius and to use natural botanicals, grown within the state. Dry Fly also doesn't take shortcuts when it comes to using state of the art equipment and traditional methods. "The stills are the pretty part," says Don Poffenroth as he points to his twin, custom-designed 450-liter Christian Carl copper-pot stills. Manufactured in Goppingen, Germany, the stills traveled over seven thousand miles to Dry Fly Distilling's home in Spokane, Washington, and today, are used to make the distillery's award-winning spirits.

Dry Fly Straight Cask Strength Wheat Whiskey is a bolder and stronger version of their Dry Fly Classic. It’s crafted from Dry Fly original 100% wheat whiskey, but instead of bottling it at 90 proof, this one is bottled at cask strength of 120 proof. Aged for over 3 years in new, 53-gallon American oak barrels, this is another beautiful example of Dry Fly wizardry. And don’t let its 120 proof fool you as this award-winning expression drinks much more smoothly than its proof would give away. Almost dangerously smoothly, one might say.

Rich amber color. Sweet notes on the nose. The palate further develops the warm notes. This is a bold whiskey, but gentle whiskey, with sweetness prevailing over delicate spice and toasted oak. Long finish.