Size750mL Proof80 (40% ABV)
Dos Maderas PX 5+5 is a triple-aged sherried rum produced by Bodegas Williams & Humbert. It is a blend of rums from Barbados and Guyana, aged first in American oak in the Caribbean, followed by maturation in Dos Cortados (Palo Cortado) Sherry casks, and then Don Guido sherry casks. 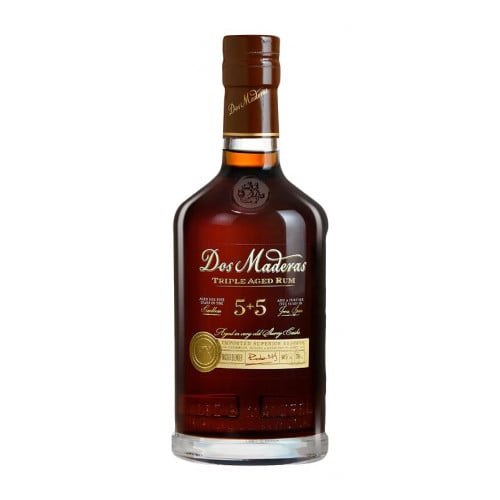 The history of Bodegas Williams & Humbert goes back to 1877, when Sir Alexander Williams, a great admirer and connoisseur of sherry products, and Arthur Humbert, a specialist in international relations, founded a winery. Since then part of the original wines and brandies has been preserved in high quality oak casks, and now serves as the base of the development and ageing of every sherry and brandy produced at Bodegas Williams & Humbert. The company is now fully owned by the Medina family. The Medina family entered the industry in the 1960s, when José, Nicolás, Jesús and Ángel, who were working at different Jerez wineries at the time, decided to open their own winery: José Medina y Compañía. In the process of acquiring different brands to strengthen and diversify its capacities, José Medina y Compañía bought the international group Williams & Humbert, which now lends its name to the entire family business.

Two generations of the family currently work at the company. Teamed up with best industry professionals, they pursue bold business initiatives while maintaining the traditions and knowledge acquired through a century and a half. Bodegas Williams & Humbert now sell their products in over 80 countries. Their portfolio comprises brandies, sherries, gins, vodkas, white and red wines, liqueurs, and rums. The firm recently entered the food sector with the Medina del Encinar brand, comprising pure sheep’s-milk cheese and Iberian pork products. Dos Maderas is a line of double and triple aged rums, which merge two cultures, the Caribbean and Spanish.

Dos Maderas PX 5+5 is a triple-aged blend of rums from Barbados and Guyana. The rum is first aged for five years in American oak in the Caribbean, followed by three years in Dos Cortados (Palo Cortado) Sherry casks at the Bodegas Williams & Humbert facilities in Spanish Jerez. The rum, which becomes “Dos Maderas 5+5” at this point, is then finished in casks, in which Don Guido sherry (Pedro Ximénez) matured for over 20 years.

The nose is sweet, with notes of raisin, fig and vanilla. Sweet and fruity palate has caramel and chocolate notes, with hints of oaky spice and tobacco. The finish is long, sherry-forward, with undertones of licorice, caramel and nuts.