Size750mL Proof80 (40% ABV)
Serving as the replacement for Diplomatica’s signature Reserva rum, Mantuano, which translate to ‘nobleman,' is a tribute to the legendary Don Juancho. 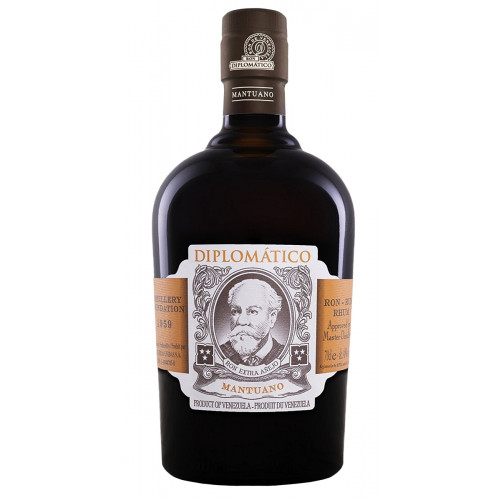 Distilled from sugarcane and aged for up to twelve years, the history of Ron Diplomático Reserva Exclusiva can be traced back to the 19th century when Don Juancho Nieto Melendez, a legendary figure in the history of Venezuela, began distilling rum near Hacienda Botucal.

Named Diplomático in honor of the statesman who brought order and balance to a restless era in Venezuela during the 19th century, these rums are the exquisite product of Venezuela's warm, tropical climate. The sunny days, cool nights, constant breeze and abundant rainfall create an idyllic environment for growing and cultivating juicy, fresh sugarcane. The sugarcane is harvested, fermented and distilled into rum, before being aged in a range of bourbon, port and sherry casks. They are then masterfully blending by the hands of Tito Cordero, Diplomático’s maestro ronero.

Each bottle of Diplomatico features the image of Don Juancho. “Dark and richly flavored with a texture to match – oily and sticky. The sweetness is tempered by gentle notes of oak and char, making it excellent, easy drinking sipping rum with enough punch to add a rich backbone to a cocktail without getting lost” (producer).

Thick, heavy and sweet aromas on the nose– like wading through molasses. Black treacle, cherries and Millionaire’s Shortbread come through, wrapped in sweet licorice and milk chocolate. The palate is spicy, rich and oily in texture. Cinnamon and nutmeg lead to polished oak before caramel sauce, soft toffees and hints of balancing bitter barrel char. The finish is soft and sweet, with herbal hints slowly fading to leave spicy oak.