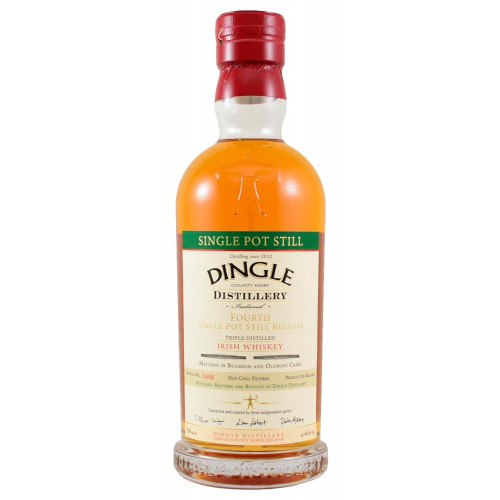 Two hundred years ago, there were over a hundred officially recognized distilleries in Ireland. Today there are less than ten. Founded as Ireland’s first artisan distillery by Oliver Hughes, Liam LaHart and Peter Mosley in 2012, Dingle Distillery takes its name from the town in which it is located, where tourists flock to visit Europe’s westernmost human settlement. An old sawmill was converted into a distillery, where Dingle marries Ireland’s tradition of independent distilling with innovative processes only feasible for small batch producers.

Dingle Single Pot Still 4th Release Triple Distilled is the fourth small batch release of Single Pot Still Irish Whiskey. A marriage of first-fill bourbon and ex-Oloroso sherry casks, this triple distilled Irish whiskey is an intense dance of richness and a rush of spice. Non-chill filtered and bottled at a pleasant 93 proof, it delights with flavors of dark fruits and figs, complimented by dark chocolate and roasted nuts. The long, memorable finish stays with you long after the glass is empty.

A rich and inviting aroma. The palate begins sweet with a burst of spice. Dark fruits, fig and raisins lead to notes of dark chocolate. The finish is long and memorable.