Size750mL Proof80 (40% ABV)
This blended Scotch gets aged for 8 years, before being finished in Ruby Port wine casks for up to 6 months. The resulting 80-proof spirit is complex, rich, and smooth with fruit, honey, and vanilla notes. 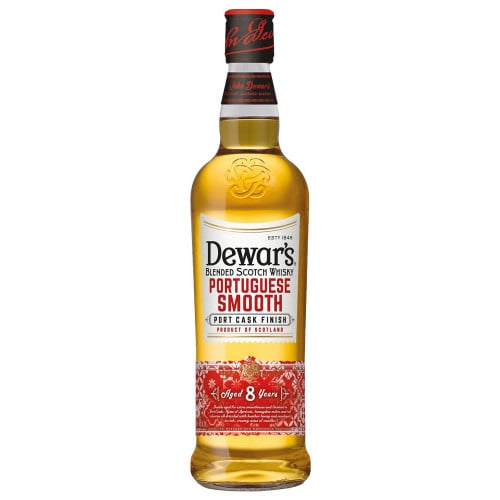 Dewar's whisky is crafted by blending together "the rarest of rare whiskies from across Scotland." The backbone is that 27-year-old single malt whisky that is crafted at Aberfeldy Distillery. Once the 27-year-old is married together with other whiskies, the resulting blend is allowed to rest again in oak casks. This secondary maturation process "is a marriage made in heaven — ensuring our whiskies are even smoother and creamier," said Dewar's retired master blender Thomas Aitken. It's this great foundation and the signature "double aging" process that has made Dewar's the most awarded blended Scotch whisky in the world.

This 8-year-old expression is a blended Scotch whisky. After its 8 years of aging, it is finished for up to 6 months in Ruby Port wine casks. Bottled at 80 proof, it's a complex, smooth, and unique Spirit with honey, vanilla, and nuanced fruit notes as well as a satisfying creaminess.

The complex whisky has fruity notes of ripe apricots, melon, and dark fruit. There's a prominent vanilla aroma that translates beautifully onto the palate with the addition of honey and a distinct creaminess. The finish is smooth and rich with lingering vanilla.