Size750mL Proof80 (40% ABV)
This single malt is pot-distilled in a single Islay distillery, aged in oak casks and bottled at 80 proof for a balanced peat-forward taste profile that one would expect from an Islay Scotch.
Notify me when this product is back in stock. 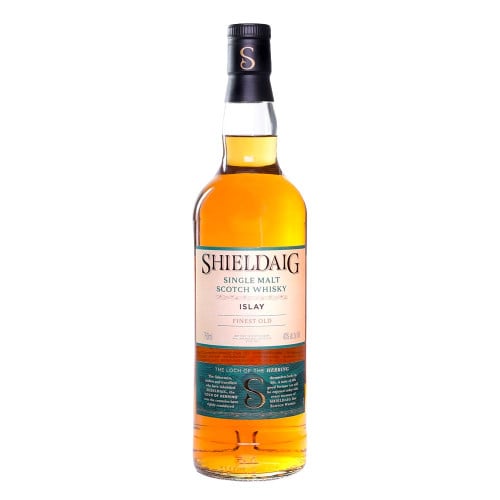 Ian Macleod Distillers Ltd. has been operational since 1936 when Leonard Russell Sr. started a whisky broking company. It was acquired by the Russell family in 1963 and has stayed family-owned ever since. It houses many a distillery and brand under their roof, ranging from whiskies like Glengoyne, Isle of Skye, King Robert II, Smokehead, and Tamdhu to vodka, gin, and rum. In the world of multi-national mega-companies, they have stayed true to their mantra of preferring quality over quantity.

Shieldaig is a collection of single malt Scotch whiskies. Named for a loch in the Ross and Cromarty area of Scotland, "Shieldaig" is derived from Old Norse and stands for "The Loch of the Herring". This line of whisky evokes the magical landscapes with misty hills and small islands poking from the dark waters of the loch ― the same area that has attracted many a fisherman, seeking to enjoy its serenity and angling for herring.

Shieldaig Islay Single Malt is pot-distilled in a single Speyside distillery from malted barley, aged in charred American oak casks and bottled at 80 proof. The overall rich profile leads with smoke and oily peat. You can expect notes of vanilla, caramel, honey, and orange zest. The medium finish contains spice and pepper, as well as nutty overtones.

The overall rich profile leads with smoke and oily peat. You can expect notes of vanilla, caramel, honey, and orange zest. The medium finish contains spice and pepper, as well as nutty overtones.