Size750mL Proof80 (40% ABV)
A classic Scotch blend from the venerable William Grant & Sons with an intriguing finish – it was aged in ale-seasoned casks.
Notify me when this product is back in stock. 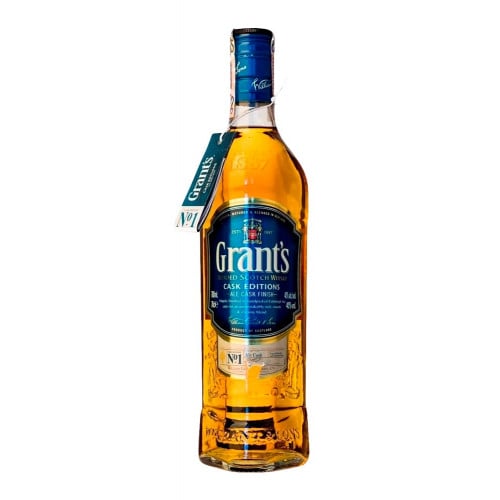 Once a cow herder, William Grant secretly learned the trade at the Mortlach Distillery where he was a bookkeeper for two decades. In 1887, William Grant founded his first, family owned distillery in Scotland. At the time, it was operated by his family members – George Grant was the maltman, Charlie Grant handled the tuns, Alec Grant was the still-man and even his daughter Meta helped by bringing them lunch. Possessing the ability to see the bigger picture, William Grant never stopped making whisky, not even during the Prohibition times when other distilleries were shutting their doors. Not Grant – he even increased production, knowing this too shall pass. Today, five generations have passed at William Grant & Sons and among their many high end brands are Glenfiddich and The Balvenie as well as Grant Whisky. With its own team of coopers, distillers and maturation experts, Grant Whisky makes premium, traditional whisky based on William Grant’s original recipe.

It's a little known fact that whisky and ale have matching profiles and Grant’s Ale Cask Edition Whisky is the first blended Scotch to be aged in ale-touched casks. Grant’s Master Blender contacted a local Scottish brewery to source seasoned bourbon casks with their ales. The result is a smooth, rich and creamy flavor profile with a clean and fresh nose, a palate of maple syrup, red apples and honey notes with a long and fresh finish. Bottled at 80 proof, this is a classic Scotch blend with an intriguing finish – something to spice up your home bar.

Get your ale-aged Scotch blend today!

A clean and fresh nose with creamy maltiness with subtle hints of elderflower and heather. The palate is bursting with flavors of maple syrup, honey and red apples with oak in the background. The finish is long and fresh with fruity and citrusy notes.