Size750mL Proof86 (43% ABV)
Created by master blender Stephanie Macleod, Dewar's 19 Year Old The Champions Edition US Open is the fruit of the partnership with the USGA to commemorate US Open Championship golf tournament. Aged for at least 19 years in ex-American bourbon casks.
Notify me when this product is back in stock. 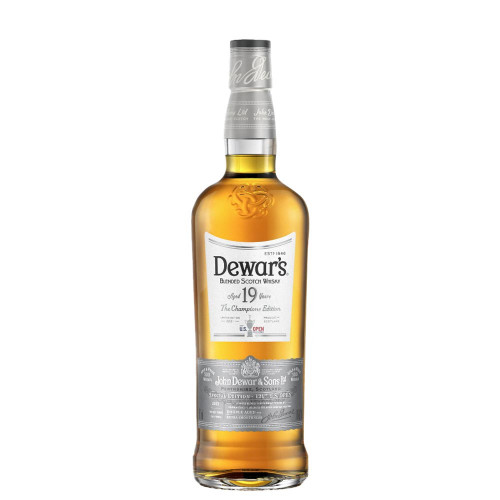 About Dewar's 19 Year Old The Champions Edition US Open

In 1846, John Dewar began blending the finest whisky he could source in Scotland and bottling it with his own name on the label. Within a decade, Dewar was supplying whisky to bars and hotels throughout Scotland. By the turn of the century, the brand had expanded to become one of the best-selling whiskies in the world and today remains one of the best-selling Scotch whiskies in the United States.

By the end of the 19th century, the famed Dewar's Aberfeldy Distillery, built by John Dewar's sons, became operational. Situated by the Pitilie Burn, the small river has served as a source of pure water to this day. After the malted Scottish barley is brought in, it is left to ferment for an extended period of time, before being distilled in tall pot stills. The Aberfeldy single malt that is produced here remains the heart of Dewar's blend today. The premises are open for tours and cask tasting with a whisky lounge and cafe on hand.

In 2021, Dewar's became the official blended Scotch whisky of the US Open Championship golf tournament. Created by master blender Stephanie Macleod, Dewar's 19 Year Old The Champions Edition US Open is the fruit of the partnership with the USGA to commemorate the 121st US Open at Torrey Pines. Aged for at least 19 years in ex-American bourbon barrels, this blended Scotch whisky is a unique commemorative bottle boasting a wonderful balance of rich notes of honey, toffee, vanilla, and ripe cherries.

Celebrate US Open Championship with this commemorative bottle!