Size1000mL Proof80 (40% ABV)
This blended Scotch whisky is an intermediate expression, expanding upon the 12 and 18 years old in the lineup. 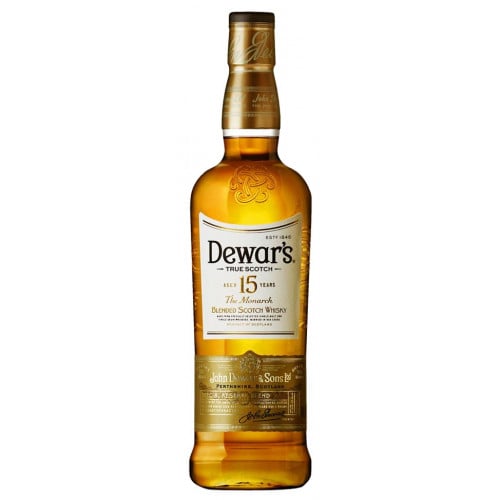 In 1846, John Dewar began blending the finest whisky he could source in Scotland and bottling it with his own name on the label. Within a decade, Dewar was supplying whisky to bars and hotels throughout Scotland. By the turn of the century, the brand had expanded to become one of the best selling whiskies in the world and today, remains the best selling Scotch Whisky in the United States.

Joining Dewar’s in 1998, Stephanie Macleod originally worked in the quality control team ensuring that both the packaging and liquid produced were only of the utmost quality. She soon rose the ranks and in July 2006, became Dewar’s first female Master Blender and the seventh overall Master Blender for the company.

Dewar’s Scotch 15 Year is an intermediate expression, expanding upon the 12 and 18 year olds in the lineup. Mixed by Master Blender Stephanie Macleod, this single malt is a blend of up to 40 whiskies aged in ex-sherry and bourbon casks, then married together in oak casks. Blending is an art, finding harmony can be challenging as older and younger whiskies have their own unique characteristics. But Dewars has proved themselves masters of this alchemy with their world renowned line-up.


Get your bottle today!