Learn more
Size750mL Proof66.7 (33.35% ABV) *Please note that the ABV of this bottle may vary
Scorpion chili peppers get macerated in rye whiskey for this hot expression. The addition of ginger and Vermont maple syrup make for an intense and unique expression that is bound to please chili-heads.
Notify me when this product is back in stock. 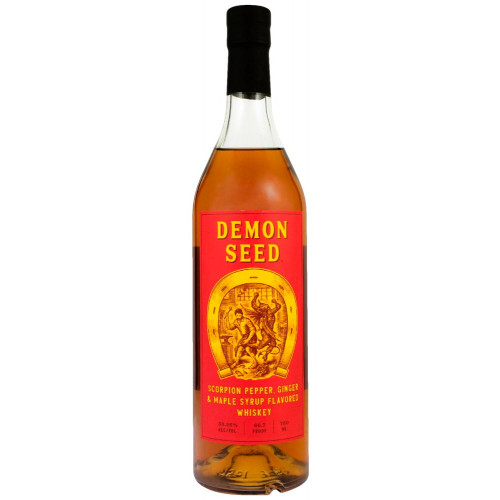 Legend has it that Saint Dunstan was visited by the devil when he needed new shoes. The metalsmith tricked the devil by nailing a horseshoe to his cloven hoof. They ended up striking an agreement: Dunstan would remove the hoof if the devil agreed to never enter a door with a horseshoe hung above it. This is said to be the origin of lucky horseshoes and with one such lucky charm hanging above the front doors of the distillery, this expression doesn't hide its inspiration.

Boston Harbor Demon Seed Whiskey sits squarely amidst the distillery's more experimental releases. This hellish expression brings the heat ― the chili pepper kind. It's crafted with Trinidad Moruga scorpion peppers, which at one time held the record as the hottest chili in the world. Whole peppers are macerated in their rye whiskey before ginger and Vermont maple syrup are added for an additional kick and a layer of sweetness. At 66.7 proof it just about hits the mark as well!

This intense whiskey has plenty of heat, owing to the chili peppers. Intense spice notes are there, owing to the chili as well as rye whiskey which serves as the base. Then there are ginger notes and an earthy sweetness with maple syrup. The finish is satisfyingly long and spicy.