Size750mL Proof84 (42% ABV)
Crafted from estate-grown agave, this mezcal earned a score of 92 points at the Ultimate Spirits Challenge in 2012, which named it the Best Mezcal in the World.
Notify me when this product is back in stock. 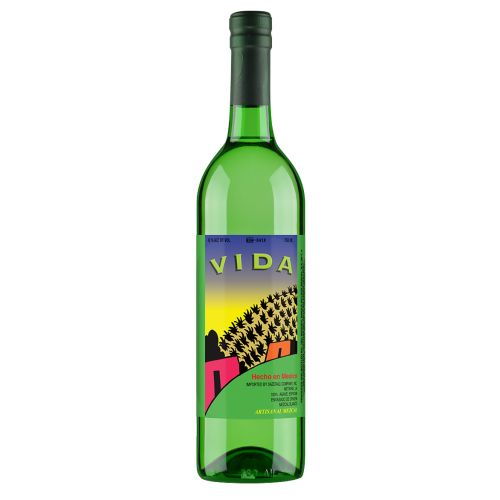 The Del Maguey Single Village Mezcal Project was founded in 1995 by Ronald Cooper, an internationally renown artist and mezcalero. The project aims to identify and support independent mezcal producers in Mexico, who are bound by a common love for the land. "Through deep cultural relationships with Zapotec Mexican Indian producers in the remote villages of Oaxaca, Del Maguey harnesses ancient, original organic processes," says Cooper. Each mezcal belonging to the project is sourced from a unique region in Oaxaca's Central Valley and represents a singularly exquisite expression of the village's terrior.

Del Maguey Vida Mezcal is crafted from estate-grown agave, which are nearly a decade old and harvested by expert farmers with a special knife called a coa. Once the agave have been harvested, the heart of the plant, or piña, is removed and cooked for several days in a large, earthen pit lined with hot stones. This process caramelizes the piñas natural sugars, and gives the piñas a slightly smoky aroma and flavor profile. Then, the piñas are crushed and fermented, before the remaining pulp is twice distilled through a small, wood-fired, riverside copper pot still. Following distillation, the mezcal is bottled at 84 proof.

Del Maguey Vida Mezcal has an aroma of honey, vanilla, pineapple and citrus that gives way to notes of fresh herbs, earthy minerals, cinnamon, banana and tangerine on the palate. The finish is long and soft, with a touch of black pepper.

The mezcal earned the Double Gold Medal at the San Francisco World Spirits Competition in 2011. In addition it earned a score of 92 points at the Ultimate Spirits Challenge in 2012, which named it the Best Mezcal in the World. It was also named one of the "Best Gift Ideas of 2014" by Esquire.

Aroma of honey, vanilla, pineapple and citrus. Notes of fresh herbs, earthy minerals, cinnamon, banana and tangerine on the palate. Finish is long and soft, with a touch of black pepper.