Caskers Rewards members earn up to 34 store points back when buying this bottle.
Size750mL Proof104.2 (52.1% ABV)
Only 5,358 bottles of this limited-edition single malt Scotch whisky, which was aged for a minimum of 25 years, were ever produced.
Notify me when this product is back in stock.

Caskers Rewards Caskers Rewards members earn up to 34 store points back when buying this bottle. Learn more
Out of stock
Skip to the end of the images gallery 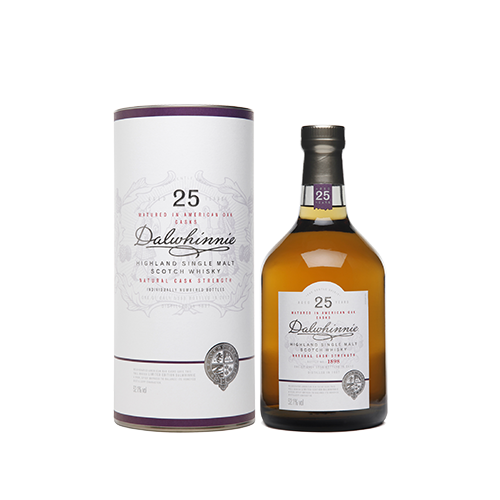 Dalwhinnie 25 Year Old Limited Edition Highland Single Malt Scotch Whisky was distilled in 1987 and matured for a minimum of 25 years in rejuvenated American oak casks. The whisky was bottled at cask strength in 2012. It has a golden amber color, along with an aroma of roasted nuts, cinnamon buns and syrup. The aroma gives way to notes of malted grains, summer fruits (particularly cherries and plums), cocoa and coffee on the palate, and ultimately leads to a finish accented by notes of creamy vanilla, ginger spice and honey.

Only 5,358 bottles of this unique single malt were ever made, and only a handful of bottles were allocated to the United States. Pick one up today!

Golden amber color, along with an aroma of roasted nuts, cinnamon buns and syrup. Aroma gives way to notes of malted grains, summer fruits (particularly cherries and plums), cocoa and coffee on the palate, and ultimately leads to a finish accented by notes of creamy vanilla, ginger spice and honey.