Learn more
Size750mL Proof96.4 (48.2% ABV) *Please note that the ABV of this bottle may vary
The second release in an annual limited released series from the esteemed distillery, The Macallan Edition No. 2 is a collaboration between the Macallan Master Whisky Maker, Bob Dalgarno, and twice-named best restaurant in the world, El Celler de Can Roca.
Notify me when this product is back in stock. 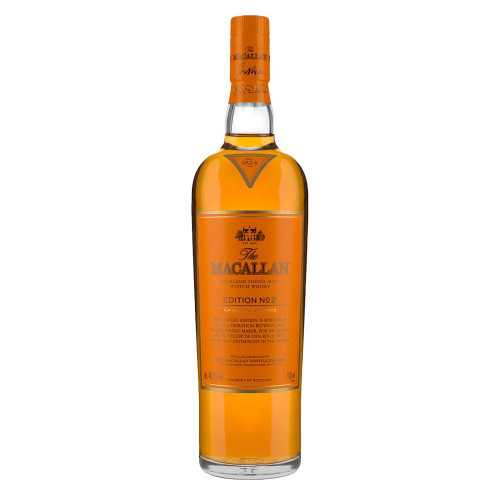 About The Macallan Edition No. 2 Single Malt Scotch Whisky

Today, the Macallan Estate encompasses 370 acres, 95 of which are devoted to the production of the Macallan Estate's Minstrel barley (a single acre produces about 2.5 tons of barley each year, enough to yield 1,800 bottles of The Macallan). In addition, the distillery contracts with farmers to purchase barley that is low in nitrogen and high in starch, resulting in a richer, weightier whisky.

Macallan Edition No. 2 Highland Single Malt Scotch Whisky is the second release in an annual limited released series from the esteemed distillery. Edition No. 2 is a collaboration between the Macallan Master Whisky Maker, Bob Dalgarno, and the Roca brothers, whose restaurant El Celler de Can Roca has been named best restaurant in the world twice.

A bit lighter than other bottles from this distillery, The Macallan Edition No. 2 has a sweet aroma of vanilla, apple and ginger. The palate brings more warmth, with hints of cracked black pepper and silky richness throughout, leading to a long and smooth finish filled with brown sugar, nutmeg, and a touch of chocolate.

Pick up a bottle of the newest Macallan today!

Sweet aroma of vanilla, apple and toffee. The palate brings more warmth, spice and complexity, with continued silky richness throughout, leading to a long and smooth finish filled with brown sugar, nutmeg and a touch of chocolate.