Size750mL Proof97 (48.5% ABV)
In collaboration with masters at the Pantone Color Institute, The Macallan Edition No. 5 celebrates The Macallan’s commitment to natural color and the intricate whisky making process.
Notify me when this product is back in stock. 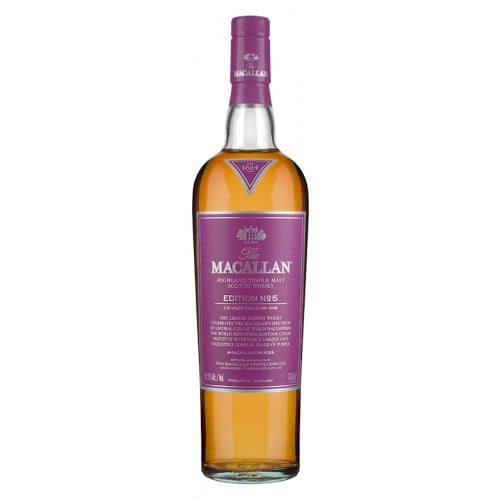 About The Macallan Edition No. 5 Single Malt Scotch Whisky

The Macallan Edition No. 5 is a homage to the diversity and complexity of natural color. In collaboration with Pantone Color Institute, this single malt celebrates the art of whisky making and The Macallan’s respect for natural color and the meticulous attention to detail.

This fifth edition is blended by whisky maker Sarah Burgess, consisting entirely of liquid matured in American oak—a combination of first-fill bourbon casks and first-fill and refill sherry casks. 100% natural in color, each exceptional whisky from The Macallan is shaped by its time spent in the very best casks; maturing, nurturing and developing character. The world-renowned color masters at the Pantone Color Institute created a uniquely bold, never before seen shade of purple for this expression; reflecting the enigmatic, multi-faceted and intricate combination of red and blue.

Vanilla and toffee with notes of oak, nutmeg, ginger, lemon basil, and pear. The palate is fresh and sweet with caramel moving into poached peaches and ripe pear. Quickly followed by a toffee sweetness with light oak spices in the form of nutmeg and hints of ginger in the background. The finish is lingering and sweet.