Size750mL Proof80 (40% ABV)
Released in 2022, this Scotch is a blend of whiskies aged at least 12 years. The whiskies mature separately in ex-bourbon and sherry casks before being bottled at 80 proof. The extra age and the addition of sherry casks result in a full-bodied and complex expression that retains the signature mellow character of the original.
Notify me when this product is back in stock. 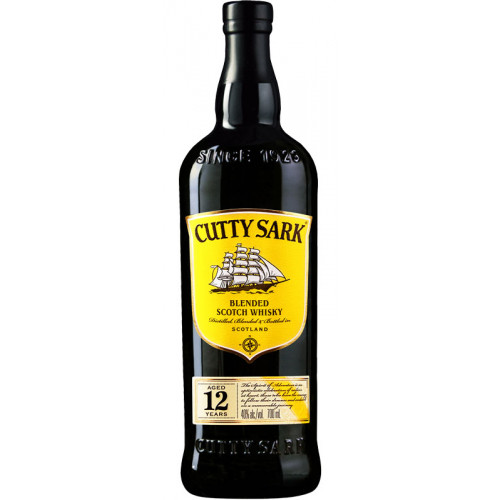 Cutty Sark Blended Scotch was named after a historic British clipper ship. In 2022 they released a 12-year-old version of their iconic blended whisky, paying tribute to the rich history and countless anchor points of the equally legendary ship. Crafted by Master Blender Stephen Woodcock, the whiskies mature separately in ex-bourbon and sherry casks. Then, they are blended and married before being bottled at 80 proof. The black bottle and cork seal are a nod to the Prohibition era, when Cutty Sark gained its notoriety. The extra age results in a full-bodied and complex expression that remains mellow with notes of dried and tropical fruits, spice, cloves, ginger, and sea salt.

Get your bottle of this 12-year-old blended Scotch today!

The whisky opens with complex aromas of fruit, spice, and a touch of sea salt. The palate is balanced with Cutty Sark's signature mellow mouthfeel and notes of dried and tropical fruits, oak, clove, and ginger with a pleasantly long finish.