Size750mL Proof80 (40% ABV)
A true summertime single malt, this Glenlivet expression has been partly finished in Caribbean rum casks for a tropical, sweet, and fruity profile.
Notify me when this product is back in stock. 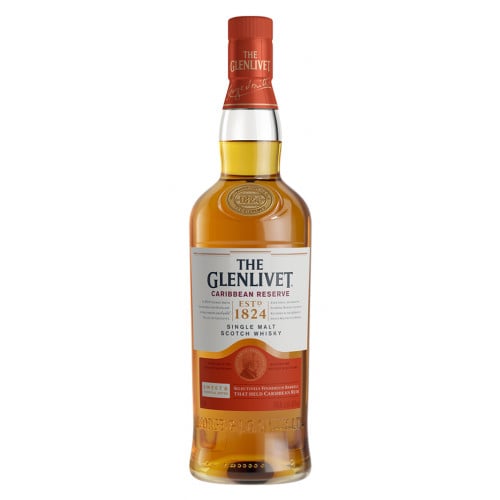 After the barley has been fermented, it is distilled twice — first through Glenlivet's wash still, and then again through Glenlivet's spirits still. Originally designed by George Smith, the copper-pot stills have a unique, lantern-like shape, which encourages contact between the whisky and the copper (the copper strips the whisky of any impurities it may have, and provides for a lighter and more pure flavor profile). In addition, the height of the stills ensures only the lightest vapors are condensed, and makes for a more delicate and elegant whisky.

The Glenlivet Caribbean reserve is a true summertime single malt. A portion of it was finished in Caribbean rum barrels, which impart it with rich and fresh sweet and tropical fruit notes. The prominent banana, mango starfruit, apple, and pear notes make up an exceptionally fruity profile that is perfect for sipping or as a base for a Mai Tai with a single malt twist.

Finishing in Caribbean rum barrels brings sweet and tropical fruit notes. There are pears and apples on the nose along with bananas, mango starfruit, and papaya. The palate has caramel and molasses, caramel toffee, mandarin orange, and vanilla, as well as more of the tropical fruit notes. Finishes smooth and well-balanced.