This product is available in: CA, ND, WA Unfortunately, we can't ship to PO Boxes and APO addresses.

Size750mL Proof80 (40% ABV)
This whisky gets its name from being “smooth as a pig's nose,” an old farming expression used to describe particularly fine fabric or wool.
Notify me when this product is back in stock.

This product is available in: CA, ND, WA Unfortunately, we can't ship to PO Boxes and APO addresses. 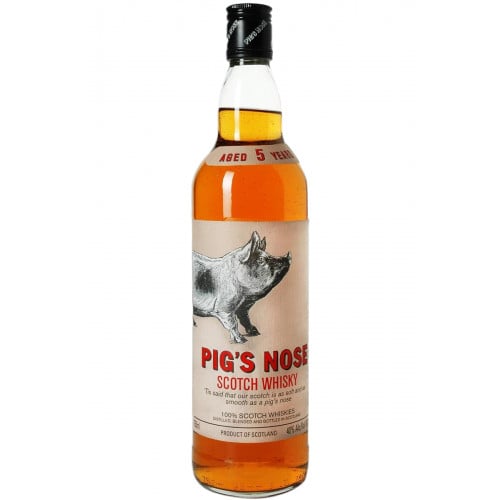 Spencerfield Spirits was founded by Alex Nicol, a former marketing director at Glenmorangie. Family owned and operated, Spencerfield is a small-batch craft distillery situated in the small town of Edinburgh, Scotland. Spencerfield is main mission is to produce the finest quality niche craft alternatives to big league brands. And their quirky farm inspired products measures up. Their flagship award-winning Sheep Dip was dubbed ‘extraordinary’ with a score of 96/100 at the Ultimate Spirit Challenge.

Their Pig’s Nose expression is another solid release produced a meticulous blend of Speyside, Islay and Lowland malts with superior gentle grain whiskies. Produced in specially selected first-fill oak casks, this whisky gets its name from being “smooth as a pig's nose,” an old farming expression used to describe particularly fine fabric or wool.

Originally launched in 1977, the Pig’s Nose blend was created by Scotland’s only third generation Master Blender, Richard Patterson. The foundation of the whisky is Invergordon grain whisky, aged in first-fill American oak barrels before adding five premium single malts; three of which hail from Speyside, one from the Highlands and a small 5% from Islay yielding a harmonious, exceptionally smooth balance of flavors.

The nose is firm and rich with luscious, creamy round tones. A smooth, harmoniously mellow blend. The palate is elegant light and incredibly smooth with spice. Signature Speyside characteristics culminate into a truly classic, long finish.