Size750mL Proof80 (40% ABV)
Crown Royal XO is an exquisite blend of 50 whiskies finished in cognac casks, resulting in both an extraordinarily complex and smooth expression. The original Crown Royal blend was created for King George VI and Queen Elizabeth, when they visited Canada in 1939.
Notify me when this product is back in stock. 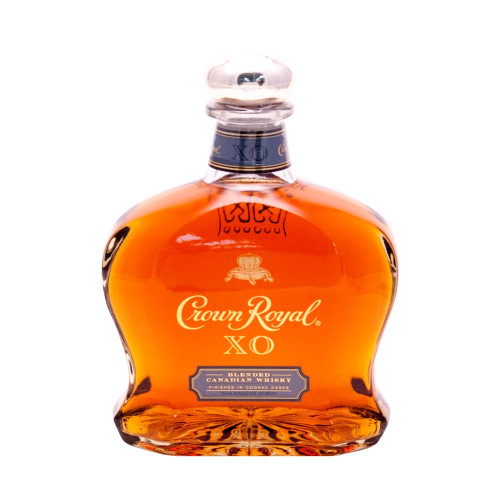 Crown Royal Blended Canadian Whisky was first created in 1939 as a gift for King George VI and Queen Elizabeth, who made history when they became the first reigning monarchs to visit Canada. Upon hearing the historic news, Sam Bronfman, the owner of The House of Seagram, set out to craft a whisky suited for the Royal Couple. He meticulously trialed more than 600 blends before settling on an exquisitely smooth blend of roughly fifty whiskies which became known, fittingly, as Crown Royal. The final product was presented to King and Queen in a cut-glass decanter and regal purple bag with gold stitching. The train carrying the monarchs was stocked with 10 cases of the royal blend. Crown Royal was released in the United States in the 1960’s and has since become the top selling Canadian whisky. To this day, every drop of Crown Royal award-winning whiskies is crafted to meet the same uncompromising standards. The brand is now owned by Diageo.

Nestled on the western edge of Lake Winnipeg, Crown Royal’s distillery in Gimli, Manitoba, is home to 1.5 million barrels of delicious whisky that sit patiently waiting to be shared with the world. Its property stretches over 360 acres with 51 warehouses (which house more barrels of whisky than there are people in Manitoba) and one stillhouse. Aware of the footprint left by such an expansive operation, the company has taken steps to minimize the impact the distillery has on its surrounding environment, and reduced carbon emissions by more than 99% over the past 10 years. The distillery sources roughly 80% of the grain (rye, corn and barley) from Manitoba and surrounding provinces. Five different mash bills and twelve distillation columns produce the individual whiskies, which are then matured for varying periods of time in either new or re-use charred oak barrels. Once matured to the blenders’ satisfaction, the whiskies are meticulously blended to create the signature rich, smooth, award-winning flavor of Crown Royal.

Crown Royal XO is an exquisite blend of 50 whiskies finished in cognac casks, resulting in both an extraordinarily complex and smooth expression. This elegant and deliciously balanced whisky, crafted by the Crown Royal Master Blender, is best enjoyed neat or on the rocks.

Muted and mild nose with notes of vanilla, caramel and light oak is followed by a balanced palate with hints of vanilla, spice and rich dried fruit. The smooth finish is medium-length with light vanilla and subtle spice.