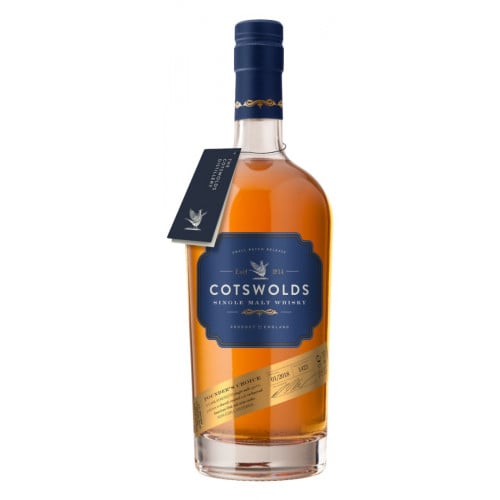 The Cotswolds Distillery is the brainchild of Dan Szor, a native New Yorker whose 30-year career in finance took him and his family to London, where they’d often escape the stress of city living by spending weekends in England’s Cotswolds. Classified as an Area of Outstanding Natural Beauty by the British government, the Cotswolds is a designated conservation area due to their significant landscape value, and it’s easy to see why Dan was so quickly enamored with the rolling hills and honey-colored cottages of the region.

While living in England, Dan’s deep-rooted passion for whisky led him on annual pilgrimages to Islay, where he fervently explored the various single malt Scotch distilleries. One day, back in the Cotswolds, Dan was staring out of a window at a neighboring barley field when he suddenly had an “aha” moment — barley was growing all over the Cotswolds, yet no one was distilling it. Dan decided to be the first, and within just a few years he had snapped up an old barn conversion, commissioned several custom stills and begun distilling the region’s very first artisanal spirits at the Cotswolds Distillery.

Cotswold Distillery maintains itself as one of the only fully operational Gin/Whisky distilleries in the United Kingdom. They also produced the first whisky made entirely in the Cotswolds. They embrace the grain-to-glass philosophy at Cotswolds, hand-crafting their spirits in small batches using high-quality local barley.

Notes of dry hay and cut wood, with dark chocolate and dried figs, and plums in sweet syrup. The palate is warming with notes of cereal and toast, with lots of fresh red fruits and butterscotch. On the finish are hints of spicy oak, lots of dried fruit and a lingering nutty, dry note.