Size750mL ProofCentennial & Galaxy - 92 (46% ABV); Rasputin 86 (43% ABV)
Distilled from malted barley, each of these whiskeys is flavored with a unique varietal of hops often used to brew craft beer.
Notify me when this product is back in stock. 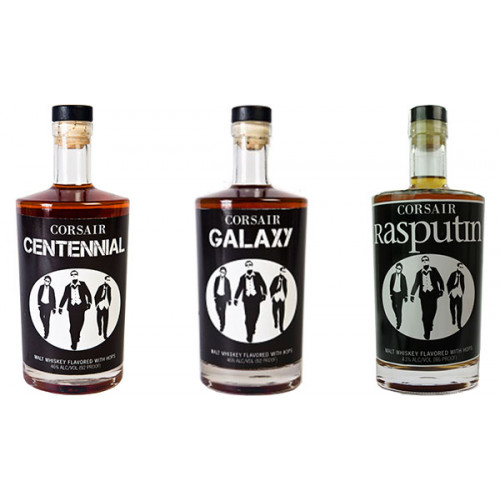 "I'm an avid whiskey lover," says Darek Bell, master distiller at Corsair Artisan Distillery in Kentucky, "but I do think whiskey could be better. Different. More interesting. More imaginative."Bell, a graduate of the Bruichladdich Distilling Academy in Islay, Scotland, is a mad-scientist and a notoriously experimental distiller. Since opening its doors in 2009, Corsair Artisan Distillery has received numerous accolades and awards, including being named the 2013 Craft Distillery of the Year and 2013 Innovator of the Year by Whisky Magazine.

Corsair Centennial Malt Whiskey is a whiskey distilled from malted barley and flavored with hops. Our "experiments and tasting competitions taught us that Centennial hops were some of the best hops possible," says Bell. Centennial Hops were first created in 1974 and boast an alpha acid rating of 9.5%-11.5%, resulting in a slightly floral flavor profile that is ideal for making pale ales and India pale ales. After Corsair Centennial Malt Whiskey is distilled with the hops, it is aged in new, American oak casks until it reaches its peak flavor. As a result, the whiskey has a sweet aroma, with touches of rose petals and orange zest. Notes of caramelized oranges and sweet malt dominate the flavor profile, and lead to a finish accented by balanced hops and sweet citrus.

Corsair Galaxy Malt Whiskey is also distilled from malted barley, but is flavored with Galaxy hops rather than Centennial hops. Bred in 1994, Galaxy hops are an Australian high alpha dual purpose triploid varietal often used to produce beers such as IPAs. The hops have an aroma of grapefruit and intense citrus, and contribute slightly milder notes of tropical fruits to the whiskey. Following distillation, Corsair Galaxy Whiskey is also aged in new, American oak casks.

Corsair Rasputin Hopped Whisky is also crafted with malted barley, and is flavored with Rasputin hops before being matured in American oak casks. Rasputin hops are often used to craft beers such as stouts, and produce a slightly darker and more grainy flavor profile. As a result, Corsair Rasputin Hopped Whisky has a malty aroma, with hints of pale ale, dark caramel and mint. The aroma gives way to notes of oak, whipped cream and a hint of bananas.

"We are a small distillery, but we have big dreams," says Bell. "Our goal from day one has been to distill the best whiskey in the world,"he adds, noting that Corsair has won 74 different medals in the past six years.