This product is available in: MN, WA Unfortunately, we can't ship to PO Boxes and APO addresses.

Size750mL Proof92 (46% ABV)
Available in limited quantities, this pot-distilled whiskey was crafted from victory barley and buckwheat.
Notify me when this product is back in stock.

This product is available in: MN, WA Unfortunately, we can't ship to PO Boxes and APO addresses. 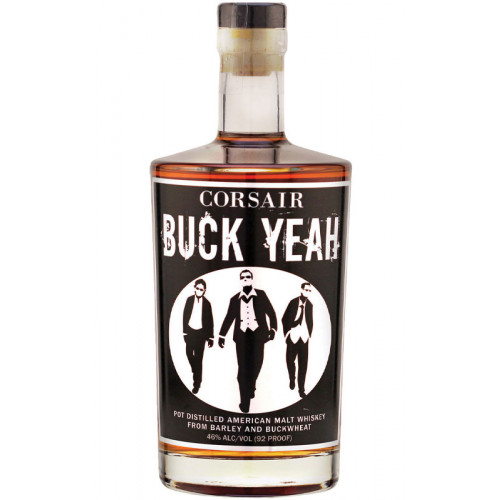 “I’m an avid whiskey lover,” says Darek Bell, master distiller at Corsair Artisan Distillery in Kentucky, “but I do think whiskey could be better. Different. More interesting. More imaginative.” Bell, a graduate of the Bruichladdich Distilling Academy in Islay, Scotland, is a mad-scientist and a notoriously experimental distiller. Since opening its doors in 2009, Corsair Artisan Distillery has received numerous accolades and awards, including being named the 2013 Craft Distillery of the Year and 2013 Innovator of the Year by Whisky Magazine.

Corsair Buck Yeah is a pot-distilled American whiskey crafted from victory barley and buckwheat. Buckwheat is an ancient grain that has been cultivated for over 6000 years, and has a remarkable in its ability to grow in difficult conditions without the use of fertilizers or pesticides. As a result of these unusual ingredients, the whiskey has an aroma of toasted nuts, almonds, cashews and roasted marshmallows. Floral notes, along with touches of nuts and toasted buckwheat, dominate the palate and lead to a warming finish.

Corsair Buck Yeah is a limited release whiskey. Pick up a bottle today!

Aroma of toasted nuts, almonds, cashews and roasted marshmallows. Floral notes, along with touches of nuts and toasted buckwheat, dominate the palate and lead to a warming finish.