Be the first to review this product
This Bonticou Crag Rye is named after the peak overlooking the Coppersea farm. This Straight Malt Rye is an authentic encapsulation of a late 19th century style New York whisky, which is crafted from 100% Hudson Valley rye, sourced directly from its own and neighboring farms in the Valley. Coppersea is proud to be a founding member of the Empire Rye consortium, and Bonticou Crag Straight Malt Rye is Coppersea’s first Empire Rye expression.
$89.99
Add to Wish List

Named for the sea of copper stills that dotted New York’s Hudson Valley throughout the 19th century — before Prohibition, the region was a bonafide hub for whiskey distilling — Coppersea Distillery strives to produce spirits in a manner reminiscent of those 19th century New York farmstead distilleries. "We are trying to get back to the roots of American whisky — what it tasted like prior to the industrialization of the process, when it was still a homespun, agricultural product like cheese or cured meats," explains Christopher Briar Williams, chief distiller.

Situated in New Paltz near the Mohonk Preserve in the Hudson Valley, Coppersea’s "heritage distilling" includes a green malting process which has been little used in the past 300 years. While most distilleries purchase their grain already malted and dried, Coppersea floor malts its grain — all of which is sourced locally — at the distillery and is one of only a handful of distilleries to still use this technique.

Bonticou Crag is full and mellow on the palate, with notes of cinnamon, nutmeg, pepper. 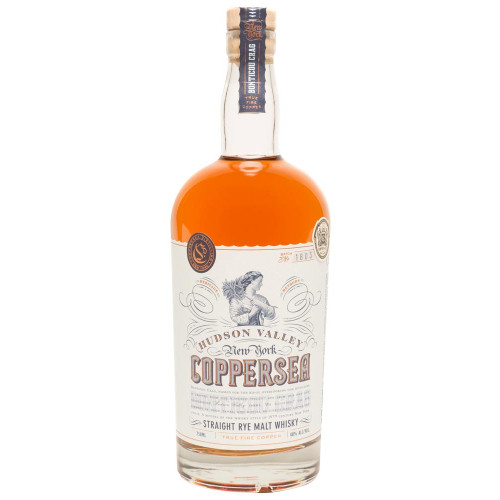