Size750mL Proof118 (59% ABV)
This whiskey is crafted with 100% mesquite-smoked malted barley, resulting in a uniquely Southwestern single malt expression. The 118-proof cask strength version is bottled from single barrels.
Notify me when this product is back in stock. 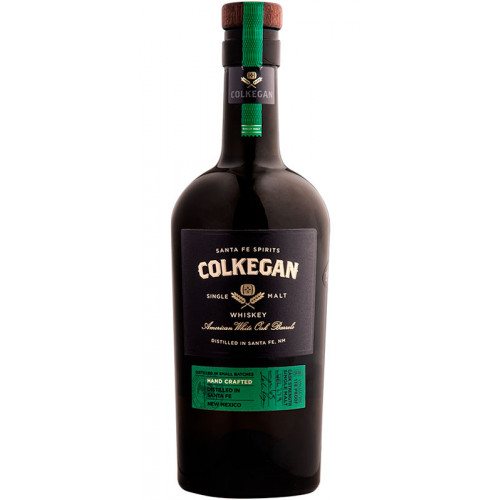 In 1990, Colin Keegan left his native country of England and moved to the British Virgin Islands with his wife, Suzette, and their daughter Phoebe. It was there, while continuing his successful career as an architect, that Colin realized his dream of living in a traditional farming community in the Southwest, and shortly thereafter Colin and his family moved once again to a mature apple orchard in Tesuque, New Mexico.

The abundance of apple cider each season gave Colin an idea, and in 2010, Colin left his job as an architect to create Santa Fe Spirits. At first, Colin focused on distilling the excess apple cider into apple brandy, and after some initial success, he expanded his business into gin, vodka, and whiskey, all of which have a distinctly Southwestern flavor.

Colkegan Single Malt Whiskey is made with 100% malted barley, which is mesquite smoked — Scotch whiskey is traditionally smoked over a peat flame, rather than wood chips — to give it a distinctly Southwestern flavor. The whiskey is then aged for a minimum of two years in a combination of new American oak and ex-bourbon barrels before being bottled by hand and individually numbered.

This is the 118-proof cask strength version of their mesquite smoked single malt whiskey. Undiluted, the essence of the whiskey is preserved with enhanced flavors and aromas of coffee, chocolate, caramel, and baking spice. The expression is bottled from single barrels.

Get your bottle of this cask-strength mesquite-smoked single malt whiskey today!