Caskers Rewards members earn up to 4 store points back when buying this bottle.
Size750mL Proof100 (50% ABV)¸
This grain-to-glass whiskey is crafted in Blanco, Texas. It takes its cues from Islay Scotch, but instead of smoking malted barley with peat, it's smoked with oak, mesquite, and apple woods ― adding a Texas BBQ twist to the expression.
Notify me when this product is back in stock. 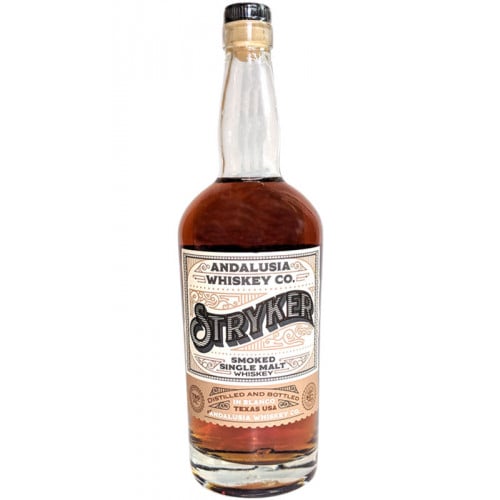 The story of the Andalusia Whiskey Co. begins with Tommy Erwin and Ty Phelps. The pair met while working at the Real Ale Brewing Company, soon becoming best friends. Tommy, a microbiologist, was in charge of the lab, while Ty was the lead brewer. They decided to team up, combine their backgrounds of brewing, chemistry, biology, culinary arts, and restaurant management, and venture into the world of whiskey. While looking for a name, they came upon some papers that showed that the land where their distillery was being built, was once home to Andalusia Ranches, the Texas Hill Country reminiscent of Andalucia, Spain. Thus, Andalusia Whiskey Company came to be.

The company produces hand-crafted grain-to-glass whiskey using a mash of the finest American malted grains. The whiskey is distilled in Blanco, Texas, using their handmade copper pot still. They currently have 4 whiskeys in their core lineup: The White, Triple Distilled, Revenant Oak, and Stryker.

Andalusia Stryker takes its cues from Scotch whisky. Namely, the tradition of smoking malted barley that Islay peated whisky is known for. There's no peat burned here, however. Instead, the malted barley used in the expression is smoked with oak, mesquite, and apple woods ― in the vein of the Texas BBQ. The double-distilled whiskey matures for at least 2 years in charred oak before being bottled at 100 proof.

Get your bottle of this uniquely Texan smoked whiskey today!

The nose opens with caramel, vanilla, smoked meat, and wood. The palate is light with caramel, orchard fruit, cereal, and a distinct and layered smokiness. The finish is oaky with hints of smoke.