Size750mL Proof108.8 (54.4% ABV)
Unlike their other offerings, this expression showcases Coalition's 5-year-old 100% rye whiskey without any wine finishes. Bottled at barrel proof, the 108.8 spirit is powerful and truly unique, owing to its mash bill. 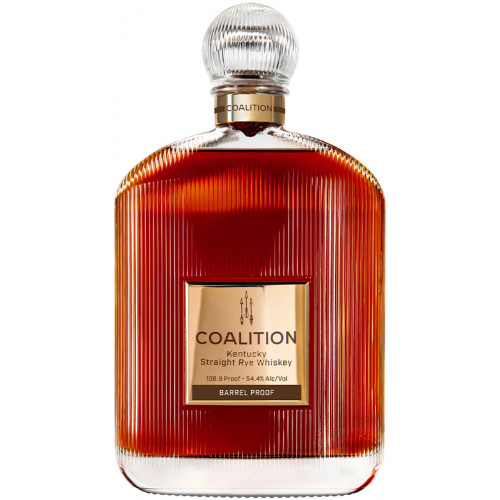 The whiskey itself is crafted with a rare mash bill of 90% rye and 10% malted rye with no automation involved and using a pre-Prohibition all-copper pot still. It's aged for 5 years in American white oak. This expression is a showcase of that rye whiskey without the wine finish, letting the unique mash bill shine on its own at a barrel proof of 108.8. Powerful with spice, butterscotch, orange zest, tobacco, and a peppery finish, the unique spirit exudes confidence.

Get your bottle of this barrel-proof 100% rye whiskey today!

The amber-gold colored 100% rye whiskey is bold and confident with aromas of spice and sourdough. The palate is complex with spice, butterscotch, orange zest, wood, as well as hints of tea and tobacco. The finish is boldly peppery with a touch of caramel and rye bread.