This product is available in: DC, NY, OK Unfortunately, we can't ship to PO Boxes and APO addresses.

Size750mL Proof80 (40% ABV)
This partnership between a music industry creative and the award-winning FEW distillery features a unique label designed in tribute to the psychedelic rock group Flaming Lips.
Notify me when this product is back in stock.

This product is available in: DC, NY, OK Unfortunately, we can't ship to PO Boxes and APO addresses. 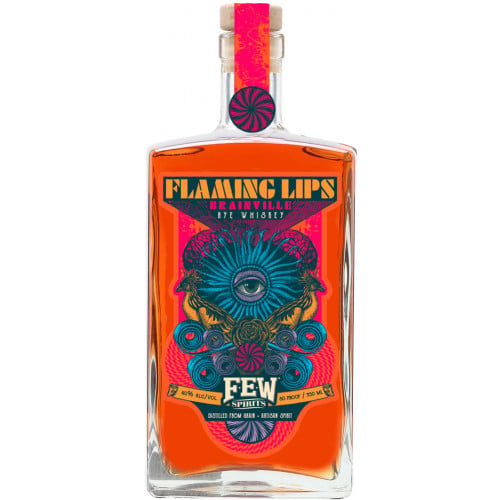 As a result, Evanston remained a dry town for over 100 years. It wasn't until Paul Hletko, owner and master distiller at FEW Spirits, began lobbying the town that the antiquated laws were lifted. "I'm the vice president of the PTA at my kids' school and I coach their soccer and T-ball teams,"Hletko says. "People around town know me and what I'm about, which is handy when you're looking to change 100 years of laws." Today, Hletko and his team of master distillers produce FEW Rye Whiskey and FEW Bourbon Whiskey in the heart of Evanston, Illinois.

Like FEW’s award winning rye, this release is made from a mash that uses corn, rye, and malted barley grown within 150 miles of the distillery. "The corn comes from a farmers co-op in Indiana and my barley and rye from farmers in Wisconsin," notes Hletko. After mashing and fermenting the grains using French wine yeast, Hletko distills the wash through his 1,500-liter Kothe copper-pot still.

After distillation, the rye is aged in custom-made oak barrels from Minnesota. "The cooper I eventually chose to make our barrels won 24 out of 25 categories at a spirits competition I visited," Hletko says. "I'm no math major, but that's the cooper I want to make our barrels." The #3 char on the barrels gives FEW Rye hints of allspice and peppercorn, which are followed by notes of dark caramel and cinnamon. In addition, the casks contribute slightly sweet hints of honey and vanilla, which are nicely balanced by a spicy finish that intensifies as it lingers.

After aging the rye, Hletko and his team of distillers fill each bottle by hand, affixed with an artistic label inspired by the psychedelic rock group, the Flaming Lips. Music industry designer Justin Helton approached the folks at FEW about the partnership. A long-time Flaming Lips fan who has also done graphic design work for Ween, Phish, and the Black Keys among others, Helton wanted to create a special product dedicated to one of his favorite bands.

Upon release, Flaming Lips frontman Wayne Coyne remarked: “Whiskey … it’s such a volatile drink. Upon pouring a drink it’s like accepting that you may become a werewolf … And really ... Who doesn't want to become a werewolf ??? Ha.” Here’s hoping this rye doesn’t actually turn you into a werewolf, that might be fun for you but it would be decidedly terrifying for everyone else. Perhaps it will inspire in you some level of transcendence nonetheless.

This is a limited release of 5,000 bottles. Get yours today!

FEW + Flaming Lips Brainville Rye Whiskey has an expressive aroma of citrus and smoke. The palate delivers notes of stone fruits, apple and pear succeeded by a sharp finish of peppercorn and allspice.