Size750mL Proof100.1 (50.05% ABV)
The very first grain-to-glass rye whiskey to come from WhistlePig, this expression was masterfully crafted by distiller Emily Harrison from 100% Remington rye grown on their farm. It's bottled at 100.1 proof ― hence the name. 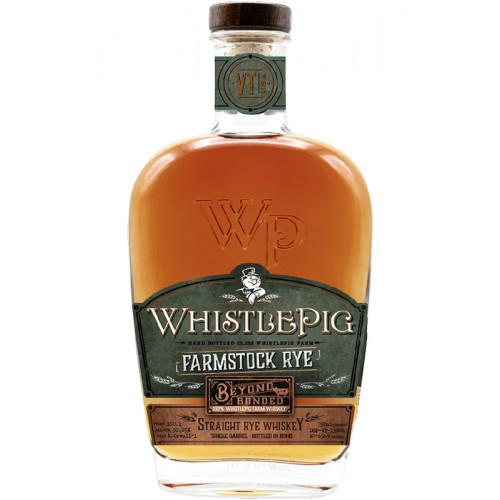 2021 marks a special year for WhistlePig. They have released their very first grain-to-glass expressions with the two Beyond Bonded whiskeys, the Farmstock Rye and the Farmstock Bourbon. Both single-barrel expressions aged at least 4 years in Vermont Estate oak casks, these are bottled at 100.1 proof ― hence the "Beyond Bonded" moniker. The Beyond Bonded Rye is made from 100% Remington rye from the North Orwell 1 field of their farm.

Grab a bottle of the first grain-to-glass WhistlePig rye today!

The nose opens with aromas of sawdust, rye grain, oak, orchard fruit, and plenty of rye spice. The palate is equally spicy with a gentle sweetness and notes of oak, herbs, and fruit.