Caskers Rewards members earn up to 3 store points back when buying this bottle.
Size750mL Proof92 (46% ABV)
Aged for 14 years in traditional oak casks, this whisky is finished in casks that were previously used to mature Oloroso Seco.
Notify me when this product is back in stock. 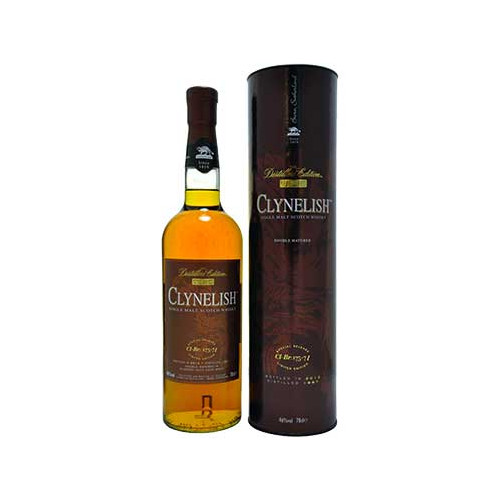 Following distillation, Clynelish Distiller's Edition Single Malt Scotch Whisky is matured for approximately 14 years in traditional oak casks. After its initial beautyrest, the whisky is double-barreled, or finished, in casks that were previously used to mature Oloroso Seco. The Oloroso casks contribute notes of dried fruits, raisins, cherries and honey to the whisky, and complement its notes of oak, cinnamon and caramel. Once the whisky has been finished in the Oloroso casks, it is brought to proof and bottled.

Clynelish Distiller's Edition Single Malt Scotch Whisky has an aroma of rum, raisins, chocolate, oranges and apples. The aroma gives way to a chewy body, with notes of dried fruits, macadamia nuts, hazelnuts, coffee and butterscotch, and ultimately leads to a long finish accented by caramel and cinnamon.

While Clynelish remains one of the more obscure distilleries in Scotland, the quality of whisky it produces and its steadfast commitment to Scottish tradition are sure to put it on the map. Pick up a bottle today!