Size750mL Proof85 (42.5% ABV)
Alabama's official state spirit, this whiskey earned the Gold Medal at the WSWA Tasting Competition in 2012.
Notify me when this product is back in stock. 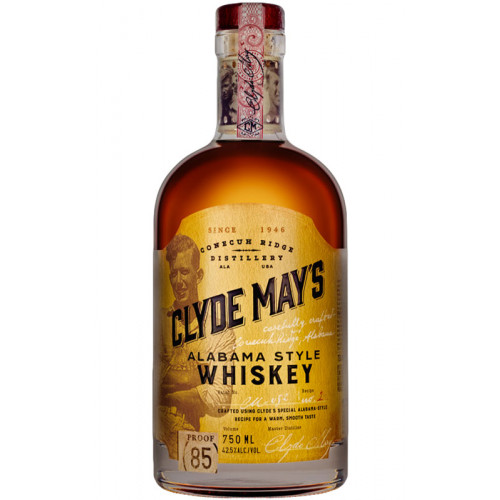 After May's death in 1990, his son, Kenny, took up the family business and began working with Kentucky Bourbon Distillers to produce a whiskey in honor of his father. Using his father's recipe and water imported from Conecuh Ridge, May produced the first legal batch of Clyde May's Conecuh Ridge Alabama Stlye Whiskey over a decade ago.

Today, Clyde May's Whiskey continues to be made from the same recipe that Kenneth's father perfected nearly 50 years ago — a mash of corn, rye and malted barley. Once the grains are distilled, they are aged in oak barrels for an average of five to six years. In April 2004, the State of Alabama designated Clyde May's Conecuh Ridge Alabama Style Whiskey as the "official state spirit." The whiskey also earned the Gold Medal at the WSWA Tasting Competition and the MicroLiquor Spirits Awards in 2012. In addition, it was named one of the Top 50 Spirits of 2012 by Wine Enthusiast, which gave it a score of 93 points. Clyde May's Whiskey has a soft, gentle flavor, and sweet notes of honey, caramel and apple that continue to pay homage to its namesake.

Soft, sweet aroma of honey, vanilla and caramel on the nose. Initial palate has flavors of oak and caramel that fade into a finish with strong notes of fresh apples and dried fruits.