Size750mL Proof95 (47.5% ABV)
Inspired by Kay Kikté – the Mayan festival of flowers, this is a blend of rums from El Salvador aged in ex-bourbon and new American oak barrels. Bottled at 47.5% ABV, it features delicate aromas of jasmine and wild orchards.
Notify me when this product is back in stock. 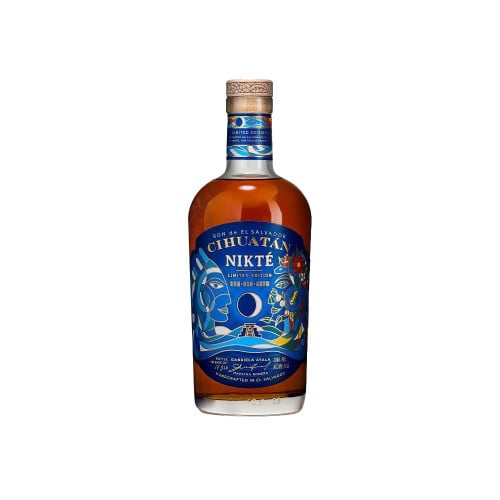 El Salvador's only rum distillery, Ron Cihuatán’s story dates all the way back to the ancient Mayan city of Cihuatán. According to legend, a Goddess bestowed Cihuatán with riches and fertility. Her spirit still watches over the sugarcane fields, remaining in the shape of the Guazapa Mountain. This Salvadorean rum is named after this legend ― the Nahuat word "Cihuatán" translates to "the land beside the sleeping woman". It's the local culture, legends, gods, and spirits, that served as the main inspiration for El Salvador's first rum distillery.

With the Mayan legends serving as inspiration, each of their rums pays tribute to a different god or spirit. For this limited-edition rum, the inspiration was drawn from Kay Kikté – the Mayan festival of flowers where Mayans would offer seas of flower petals to the Goddess during an enchanted nocturnal celebration. During the making of this premium rum, Gabriela Ayala wished to honor the Queen of the Night, also known as Sac Nicté in Nauhat. A blend of rums aged in American oak ex-bourbon and new American oak barrels, this stunning rum offers flower aromas of jasmine and wild orchids – the same flowers from the ancient ceremony. Bottled at 47.5% ABV, this is a soft, delicate and flavorful premium rum.

Orange brown color. A delicate and flowery nose with aromas of jasmine, wild orchards, and honey. The palate is slightly sweet, firm but at the same time gentle with flavors of flowers and raw honey. The finish is long and smooth.