Caskers Rewards members earn up to 3 store points back when buying this bottle.
Size750mL Proof90 (45% ABV)
With its blend of classic bourbon and rye whiskies, Chicken Cock Bootlegger´s Blend is almost a rye. And at 45% ABV, it is a great base for your next Manhattan.
Notify me when this product is back in stock. 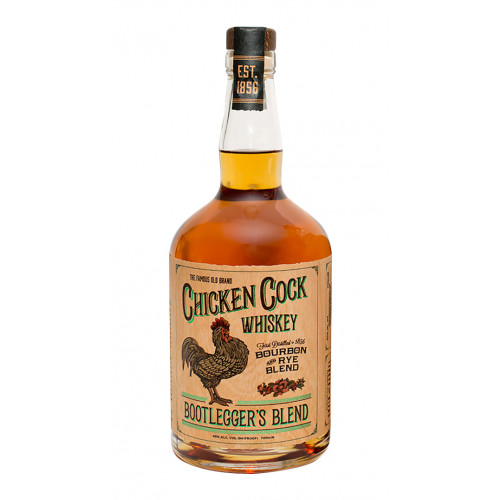 Founded in 1856 near Pari, Kentucky, Chicken Cock Whiskey was a successful brand in its day. Brand goes all the way back to 1856 in Paris, Kentucky. But things took off during the Prohibition era. The owners moved production to Canada and packaged their whiskey in mislabeled tin can. In fact, one of their best customers was the famous Cotton Club in New York City where their whiskey would be served in fancy cocktails while greats of the early Jazz age would play on stage. But in the 1950’s the famous Chicken Cock Distillery burned down.

Fortunately, Matti Anttila of Grain & Spirits bought the brand and re-released a new line of whiskey in 2016. But given their history, it’s easy to understand how Chicken Cock Bootlegger´s Blend got its name. It’s called a blend because it’s crafted from two sourced Whiskies. It’s 40% rye from Indiana (almost certainly MGP Distillery) and 60% Kentucky bourbon (most likely Bardstown Distillery) — both aged in new charred oak for just under three years. The resulting spirit is bottled in their distinctive, old-school bottles at 45% ABV.

Since it’s a blend, the final mash bill is hard to precisely quantify. But it seems to come in regularly at more than 50% rye grain, which would normally qualify as a rye whiskey. That means that the flavor profile leans toward the black pepper and apricot side while still retaining the chocolate, leather, and vanilla notes of the bourbon. The finish is long and pleasantly hot.

The aroma is young and fresh with spices and stone fruits. On the palate, the flavors open up on a light body with dried apricot, baked peaches, white chocolate, leather, and sandalwood.