Learn more
Size750mL Proof102.2 (51.1% ABV) *Please note that the ABV of this bottle may vary
This 12-year-old single malt comes from the Glenlossie distillery ― a major contributor to Diageo's blends. Known for its delicate profile and oily texture, the spirit was aged in a refill bourbon hogshead that yielded a total of 277 bottles.
Notify me when this product is back in stock. 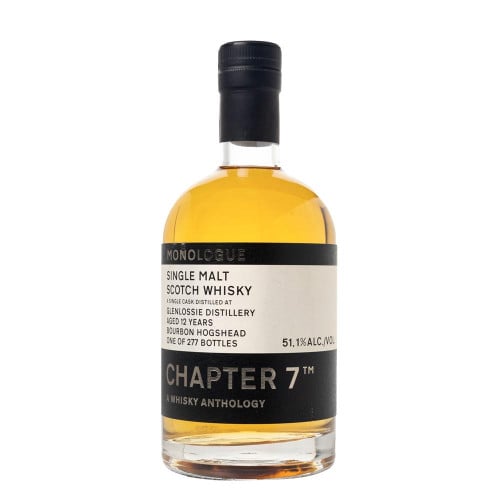 Chapter 7 has three series of expressions: Monologue, Anecdote, and Chronicle. The first are unique single casks, the second once-in-a-lifetime small batches or married atypical whiskies, the third has their aging reserves. The Monologue #14 release is a 12-year-old Speyside single malt from the Glenlossie distillery. Distilled in 2008, it's the first Glenlossie to be bottled by Chapter 7. The distillery is known for the delicate profile and distinct oily texture of its spirit, which stems from purifier pipes used on their stills. While rarely seen as a single malt bottling, the whisky from the distillery is a major contributor to Diageo's blends. The single-cask expression was aged in a refill bourbon hogshead that yielded 277 bottles in total. It was bottled at 102.2 proof.

Grab one of only 277 bottles of this delicate Speysider today!

The nose of this delicate whisky opens with enticing aromas of almonds, spicy oak, melon, and milk chocolate. The palate has hazelnut praline, oak, berry jam, and vanilla fudge. The satisfyingly long finish has lingering notes of orange zest, apple, and a touch of nutmeg.