Size750mL Proof90 (45% ABV)
Barreled in 1977, this 41 Year Old Canadian whisky is the oldest age statement ever released by Canadian Club.
Notify me when this product is back in stock. 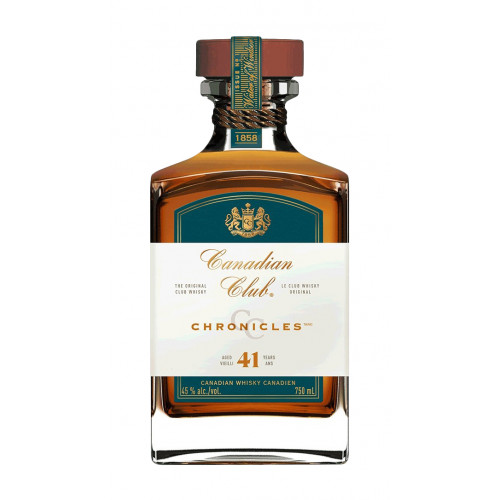 In 1858 Hiram Walker opened a whisky distillery that would become a North American symbol. Walker first founded his distillery in 1858 in Detroit. He had learned how to distill cider vinegar in his grocery store in the 1830s he produced his first whisky barrels in 1854. in 1891 Canadian Club, more popularly known as “CC,” became the first North American spirit to receive a Royal decree, from Queen Victoria. This ordained and highly acclaimed.

Prohibition forced Walker to leave the “dry" state of Michigan, and strategically transplant his distillery across the Detroit River to Windsor, Ontario. Located just over the border Walker was actually able to continue legally producing whisky when the sale of beverage alcohol was prohibited in the United States. Whisky also became one of the most smuggled whiskies in the U.S. at the start of Prohibition. The Canadian Club became a haven of clandestine activities at the peak of America’s Prohibition.

Rumor has it that CC was highly favored by the likes of Al Capone and that he had a lucrative business scheme smuggling the spirit across the Detroit River. Walker’s whisky was particularly popular in the late 19th century gentlemen's clubs of the United States and Canada; this is where it got the name "Club Whisky".

Walker also revolutionized the whiskey industry by aging his spirit in oak barrels for a minimum of five years, at a time that all of the US bourbons and whiskies were aged for less than a year. Canadian Club has continued to be a success.

This 41-Year-Old Canadian whisky is the oldest age statement ever released by Canadian Club. Barreled in 1977, Water of Windsor pays homage to the birthplace of Canadian Club—Windsor, Canada. Blended with subtle accents of cognac, rye, and sherry this blend has extreme depth and complexity. Bottled at 90 proof in a unique decanter.

Caramel and toasted oak harmonize on the nose with spiciness and a slight vanilla sweetness. The palate delivers notes of dark plum and vanilla balanced with caramel, oak and a rye spiciness; complex, yet smooth and satisfying. The finish is warm and lingering.