Bushmills has recently changed its designs, and as the original labels are being phased out, there is still a chance that you might receive a bottle different than what is in the picture. Rest assured, the liquid remains the same, regardless of the design.
Notify me when this product is back in stock. 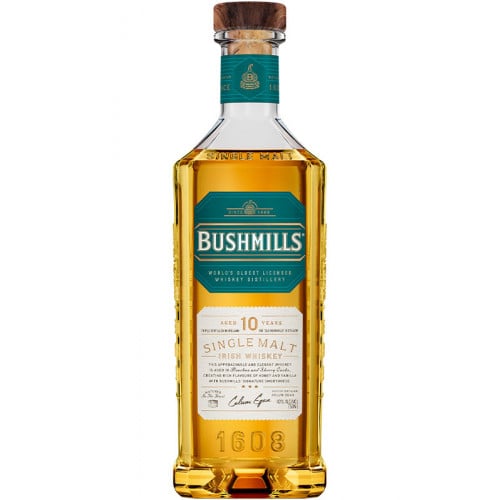 The United States was a very important market for Bushmills (as well as other Irish Whiskey producers) in the 20th century. In 1920 when Prohibition hit, the Irish Whiskey industry suffered a massive blow, that Bushmills resiliently managed to survive. This was largely due in part to Wilson Boyd -Bushmills’ director at the time- who (predicting the end of Prohibition) made the intsightful decision to rack up large stores of whiskey ready to export.

The distillery was purchased by Isaac Wolfson at the end of World War II. Then the Irish Whiskey industry dried to a trickle. Bushmills was one of only two distilleries in Ireland in 1972, until it was taken over by Irish Distillers. This gave Irish Distillers complete control of whiskey production in Ireland. In June 1988, Irish Distillers was bought by French liquor group Pernod Ricard, and then in June 2005, the distillery was bought by Diageo. Bushmills is now in the hands of Jose Cuervo, and celebrated its 400th anniversary in 2008. Bushmills Single Malt Whiskey 10 year old is triple distilled from 100% malted barley and matured for at least 10 years in bourbon season barrels which give it its honey, vanilla and milk chocolate aroma. Have it neat, over ice, or even frozen.

Light and fruity on the nose with spicy aromas. On the palate is decadent with cocoa nibs, followed by a crisp, clean finish.