Learn more
Size750mL Proof122.4 (61.2% ABV) *Please note that the ABV of this bottle may vary
Clocking in at 309.1PPM at malting, this Octomore expression is the peatiest Bruichladdich in history, and quite possibly the peatiest whisky ever recorded.
Notify me when this product is back in stock. 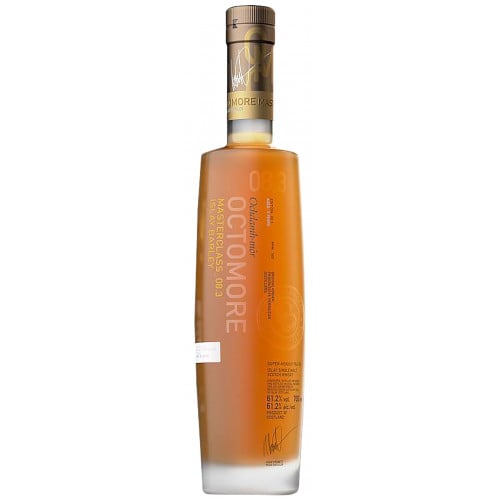 The Octomore farm is situated on the Rhinns of Islay, a remote area nestled high upon a hill, overlooking the village of Port Charlotte. Octomore harkens to the days of stone cold independence during a time when the legality of distilling had just barely entered the era of “enlightenment."

The 49 tons of barley, grown on the Octomore farm, are germinated over a period of three days. Using a Sphagnum-based peat high in incredibly high in phenols, so high in fact, that Octomore 8.3 is one of Bruichladdich's most heavily peated whiskies, producing a reading of an astronomical 309.1PPM (Phenol Parts per Million), the highest ever recorded at the malting stage.

Dried over peat for five days, the malt is then shipped to Islay, where it is ground into grist using a mill made by Robert Boby, installed at the distillery in 1913. The grist is meticulously analyzed before being mashed and fermented in Douglas fir washbacks. The wash is then twice distilled in 17,275 liter steam heated copper distinct from the much wider pot stills that are traditionally used to distill heavily peated Islay whiskies. This is the first chapter in the Octomore odyssey to be entirely created by Head Distiller Adam Hannett. Distillation is also overseen by Production Director Allan Logan.

The only expression of the series to be aged five years instead of eight, Octomore 8.3 is aged in a variety of toasted ex-Bourbon and ex-wine casks crafted from European oak (56% ex-Bourbon American oak; 44% ex-Pauillac, Ventoux, Rhône and Burgundy European oak casks), which impart their own unique characteristics onto the spirit, collectively yielding a nutty, sweet, and floral aromas. Peat takes center stage in this Octomore expression, but this 5YO is also full of dark chocolate, peaches, and cherries. A bold whisky that reminisces back to the early days of the Octomore distillery. Bottled at a staggering 61.2% ABV.

Toasted oak and peat on the nose with notes of maple syrup, fresh linen, and sea shells, followed by peat moss, and subtle floral notes. Aromas of cherry, peach and mango, are followed by crème brulee and toffee. On the palate there is again a strong sense of bitter peat, with notes of cherry, peach, toasted sweet oak, dark chocolate, and seaweed. The finish is complex, with crème brûlée caramelized brown sugar. Notes of dark plum, orange and kiwi are followed by a malted barley sweetness. The finish is heavily peated with roasted coffee, and burnt heather.