Be the first to review this product
Only 338 bottles of this single malt whisky, which was aged for 20 years, were ever made.
Add to Wish List
Notify me when this product is back in stock.

After fermentation, the wash is double-distilled through Bruichladdich's 130 year-old, 20-foot tall, diamond-shaped stills. The Victorian-era stills produce whisky that is notably floral and elegant. In 2003, Bruichladdich discovered that a Pentagon agency — the Defense Threat Reduction Agency — was monitoring the distillery's webcams. "When Bruichladdich asked why the agency was interested in a distillery in a remote Scottish location, the agency said that the process of manufacturing chemical weapons and distilling whiskey were very similar so it was using the Bruichladdich web site to train its operatives," according to Computing, a United Kingdom-based publication.

Bruichladdich 1992 Single Malt Scotch Whisky (Signatory Bottling) was distilled in November 25, 1992 and matured in a traditional, oak cask (Cask #3686) for 20 years. After 7,601 days of maturation, the whisky was bottled at 92 proof. It has a golden honey color, along with a floral aroma accented by notes of raisins and malt. The aroma gives way to notes of caramel, malt and creamy vanilla on the palate, which are complemented by a subtle citrus undertone. The finish is long and slightly warming, with a touch of cloves and cinnamon. Only 338 bottles of this single malt whisky were ever made. Pick one up today!

Golden honey color. Floral aroma accented by notes of raisins and malt. Notes of caramel, malt and creamy vanilla on the palate, which are complemented by a subtle citrus undertone. Finish is long and slightly warming, with a touch of cloves and cinnamon. 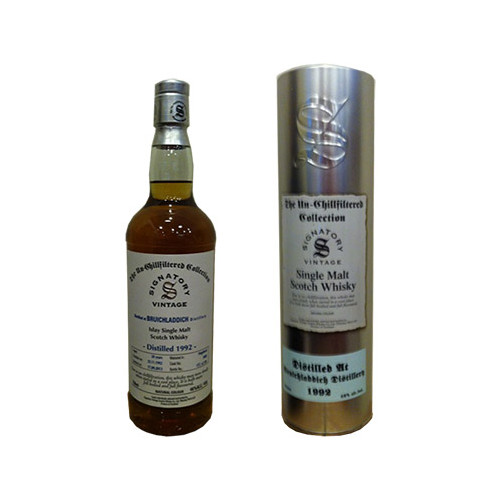