Size750mL Proof90 (45% ABV)
Each barrel used to mature this bourbon was hand-selected exclusively, from a selection of retired PX barrels from a centuries-old solera.
Notify me when this product is back in stock. 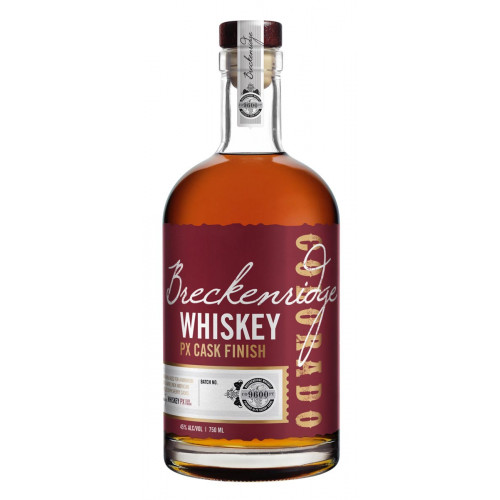 With a profound range of expressions ranging from award-winning bourbons and Port cask finished whiskeys to Chili flavored vodkas, and over two dozen awards, including 2 “Distillery of the Year” awards, Breckenridge is without saying a well-established player in the game. This is very impressive considering Bryan Nolt founded Breckenridge in 2007.

Situated in the heart of the Rocky Mountains, Breckenridge Distillery makes one of the best bourbons in the world. The distillery, which is only 4,000 square feet itself, is situated 9,600 feet above sea level, making it the highest distillery in the world. There, Jordan Via — Breckenridge's master distiller — ferments a mash of 56% corn, 38% rye and 6% malted barley in an open-top Scottish fermenter before distilling it twice through a 550-gallon, Vendome copper-pot still originally made in Kentucky.

After distillation, the bourbon is aged at 120 proof in American white oak casks with a number 3 char for approximately three years and is then brought to proof using pure Rocky Mountain snowmelt from atop Mount Quandry, which has a 14,000-foot peak. "In Breckenridge, we have fresh snowmelt water that's full of minerals and has its own flavor," says Bryan Nolt, Breckenridge Distillery's founder and CEO. "The pH is perfect and the minerals add taste to our spirits just as salt adds flavor to foods," he says.

“There are countless ravishing Single Malt Whiskies aged in used Bourbon barrels, but a Sherry cask-aged malt Whisky just has a little extra special mojo. We were determined to find a Sherry cask to marry with Bourbon-style Whiskey. Our search for the perfect Sherry was unbalanced until we made it all the way to the concentrated and creamy side of the Sherry spectrum and found the perfect match, Pedro Ximenez” says Bryan Nolt, Founder/CEO of the Breckenridge Distillery.

Each barrel was hand-selected exclusively, from a selection of retired PX barrels from a centuries-old solera. These barrels were filled with their bold Bourbon Whiskey. What is left is a wonderfully well-rounded bourbon with aromas of fig compote, almond butter and black licorice followed by rich, full-bodied flavors of orange marmalade and Madagascar vanilla bean. The finish is long with notes of sweet oak and ripe sultanas with perfectly balanced heat.