Size750mL Proof90 (45% ABV)
This California bourbon, which is blended from just eight barrels per batch, won the Double Gold Medal at the San Francisco World Spirits Competition in 2014. 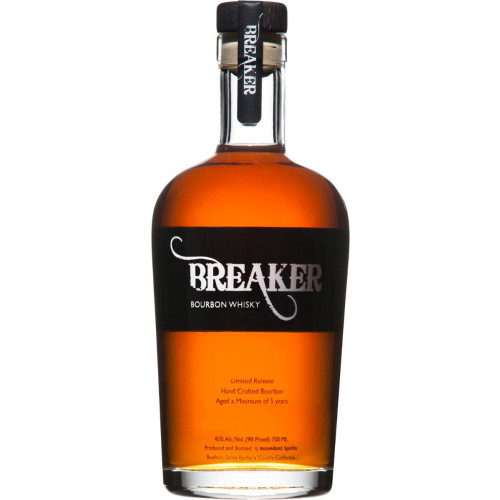 Named for the waves at El Capitan and other local beaches, Breaker Hand Crafted Bourbon Whiskey is made from a mashbill of corn, rye and malted barley before being aged for a minimum of five years in new American oak barrels. Once mature, the whiskey is blended from just eight barrels per batch, giving it a nose of vanilla, candy corn, cinnamon and a touch of smoke. The palate is filled with caramel, taffy and graham crackers, and leads to an extremely smooth finish accented by honey and chocolate chip cookies.

Says Gertman, “With such small production, we cannot hide or blend away flaws or mistakes — our methods and products must be perfect.”

In 2014, Breaker Hand Crafted Bourbon Whiskey was awarded the Double Gold Medal at the San Francisco World Spirits Competition as well as the Gold Medal — Best American Bourbon (Aged Under 7 Years) at the World Whiskies Awards.

Vanilla, candy corn, cinnamon and a touch of smoke on the nose. Palate filled with caramel, taffy and graham crackers, leading to an extremely smooth finish accented by honey and chocolate chip cookies.