Size750mL Proof101.6 (50.8% ABV)
This limited edition whisky was aged for 23 years in port casks before being bottled at cask strength.
Notify me when this product is back in stock. 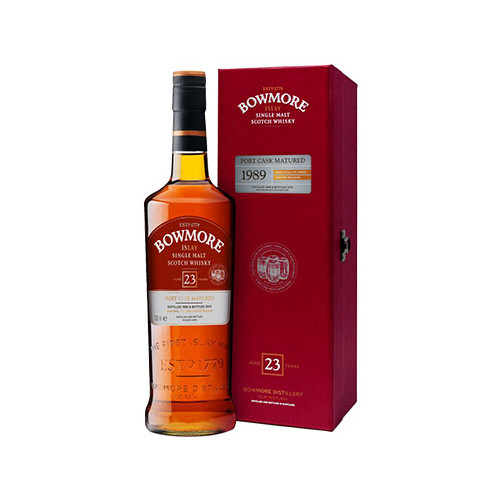 Situated along the shores of Long Indaal, Bowmore Distillery was founded in 1779 by John Simpson. The distillery is the oldest distillery on the island of Islay and the second oldest in Scotland. Its unique location — Long Indaal suffers from steady gusts of wind and strong eddies that make its waters especially hazardous — plays an integral part in defining the lush, rich character of the single malt whisky it produces.

Bowmore Single Malt Scotch Whisky is made from barley that has been expertly cultivated in the rolling hills of Scotland. Once the barley has been harvested, it is malted and peated at the distillery — Bowmore remains one of the few Scottish distilleries that continues to hand-turn, malt, and peat its own barley. Unlike some other distilleries on Islay, however, the drying process is much shorter at Bowmore — only 15 hours — and utilizes only half as much peat, resulting in a whisky with a robust yet still mild smoky flavor.

Following distillation, Bowmore 23 Year Old Port Cask Single Malt Scotch Whisky was matured for 23 years exclusively in port casks and then bottled in 2013 without the use of chill-filtration. This is "truly an exceptional Bowmore," says Brand Ambassador Gordon Dundas . "Full maturation in the finest port casks is rare but gives this bottling an amazing depth and flavour developed over 23 years while importantly still retaining all of the character of Bowmore." The whisky has a deep ruby red color, along with an aroma of plums, black cherries, wood smoke and sea salt. The aroma gives way to notes of autumn fruits, winter spices and truffles on the palate, and leads to a finish accented by notes of berries, blood oranges, and red fruits.

Fewer than 12,000 bottles of this single malt have ever been produced. Pick one up today!