Learn more
Size750mL Proof107.6 (53.8% ABV) *Please note that the ABV of this bottle may vary
Distilled in 1990, this Islay single malt has spent 16 years in oloroso sherry casks before being bottled in 2006 at a cask strength of 107.6 proof.
Notify me when this product is back in stock. 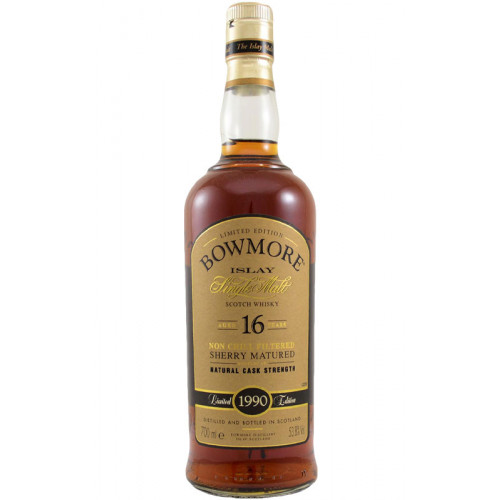 Distilled in 1990, this Bowmore 16-year-old is a limited-edition whisky that was bottled in 2006 at a cask strength of 107.6 proof. 39 oloroso sherry casks were patiently aged in Bowmore's underground vaults, eventually finding their way into this balanced, warm, rich, and smoky expression.

Get your bottle of this limited-edition whisky today!

Bowmore’s Single Malt Whiskies are made from barley that has been expertly cultivated in the rolling hills of Scotland. Once the barley has been harvested, it is malted and peated at the distillery — Bowmore remains one of the few Scottish distilleries that continues to hand-turn, malt, and peat its own barley. Unlike some other distilleries on Islay, however, the drying process is much shorter at Bowmore — only 15 hours — and utilizes only half as much peat, resulting in a Whisky with a robust yet still mild smoky flavor.
Explore all Bowmore bottles >>

The light teak whisky is rich and complex with aromas of dark chocolate, raisin, figs, and signature Bowmore smokiness. The palate is warm and rich with fruit cake, hints of brine, and spice, culminating in a long and elegant finish.