Learn more
Size750mL Proof127.9 (63.95% ABV) - may vary *Please note that the ABV of this bottle may vary
Aged for seven to nine years and bottled at a robust ~130 proof, this bourbon earned a 90-95 point rating from Wine Enthusiast and is a three-time Double Gold medalist at the San Francisco World Spirits Competition.
Notify me when this product is back in stock. 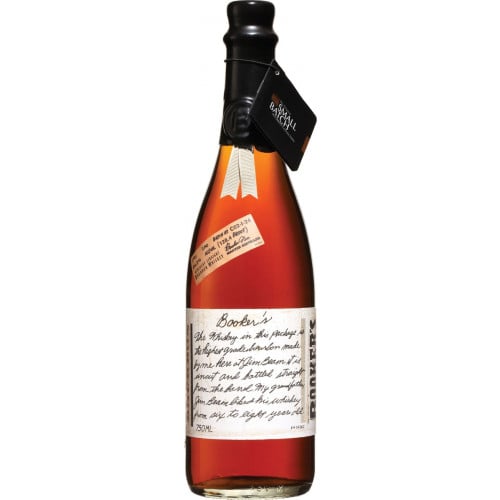 Booker's Small Batch Cask Strength Bourbon Whiskey is named in honor of Booker Noe, the grandson of Jim Beam. Made from a mash of primarily corn, the bourbon was initially bottled by Noe to be used as gifts for close friends and family. Today, the bourbon is matured in virgin American oak casks that are situated in the center of a Kentucky rickhouse, where the temperature and humidity are the most favorable for maturing whiskey. After the bourbon has matured for seven to nine years, it is bottled at cask strength (~130 proof) without the use of chill filtration or artificial coloring.

As a result, the bourbon has a powerful aroma of caramel, vanilla and oak that opens up to notes of pepper, brown spices, mint and cloves with a splash of water. Notes of dark chocolate, butterscotch, leather and dark fruits dominate the palate, and give way to a bold and intense finish.

Booker's Small Batch Cask Strength Bourbon earned the Double Gold Medal at the San Francisco World Spirits Competition in 2006, 2007 and 2009, and earned a score of 90-95 points from Wine Enthusiast. "This is bourbon the way it used to be. The way it was meant to be," says Booker.

Aroma of caramel, vanilla and oak that opens up to notes of pepper, brown spices, mint and cloves with a splash of water. Notes of dark chocolate, butterscotch, leather and dark fruits dominate the palate. Bold and intense finish.