Learn more
Size750mL Proof128.5 (64.25% ABV)
Booker’s Roundtable' honors one of their own, Tommy Crume (who retired in 2016), with the first batch of 2017 to be in his namesake. This special bourbon tribute is a small batch blend of whiskies, produced between January 2009 and July 2010.
Notify me when this product is back in stock. 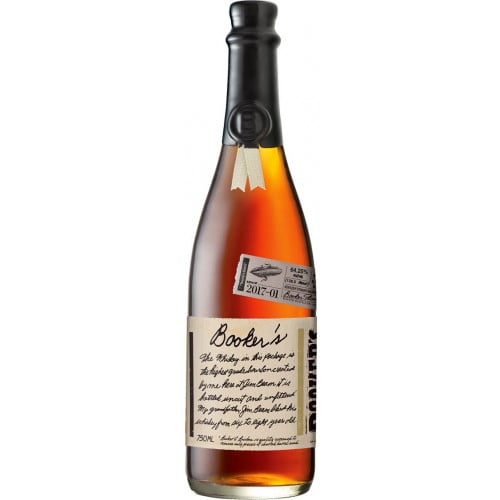 Booker Noe was a sixth-generation Master Distiller, raised at a distillery in the middle of Kentucky. Booker was born with Bourbon in his blood. At 21 years old, he was finally able to start his passion of distilling.

In 1992, he gave the world to small batch bourbon, actually coining the term “small batch.” With this signature style of bourbon, Booker’s True Barrel Bourbon was born. Inspired by the traditions of 200-years ago.

With the highest alcohol content of the brands of Jim Beam, the “Small Batch Bourbon Collection” is a range of cask strength, non-chill filtered solid bourbons, uncut and unadulterated, they are bottled between 121 and 130.6 proof.

The brand introduced bourbons hand selected by the late Booker Noe himself, who originally bottled his raw uncut bourbons for friends and family.

The brand introduced bourbons hand selected by the late Booker Noe himself, who originally bottled his raw uncut bourbons for friends and family. Aged at center cut, this particular batch of Booker’s is named after Tommy Crume, a longtime confidant of Booker Noe, who began his distillery career as a young man, working closely alongside Noe for decades. After retiring in 2016, Booker’s round table honored Crume with the first batch of 2017 to be in his namesake.

This special bourbon tribute is a small batch blend of whiskies, produced between January 2009 and July 2010. At exactly 6 years, 4 months, and 6 days, the barrels that comprise this whiskey were drawn from three warehouses, for a total of 335 barrels (a relatively small batch for a distillery of Jim Beam’s cosmic proportions). Bottled at a high-octane 128.5 proof, this bourbon is robust on the nose, and sweet on the palate after its initial burn. With intricate notes of vanilla, tobacco, citrus, and basil, this bourbon has a warm lingering finish.

Big and robust on the nose with classic notes of vanilla, molasses, charred oak, sweet salty corn, herbs. After its initial burn the palate is sweet with brown sugar, vanilla, tobacco, and toasted almonds. With a subtle taste of chocolate, oranges and fresh basil, the finish is warm and long, with lingering notes of honey nut cereal, molasses, and barrel char.