Rating:
80%
4
Earn up to 5% back on this product with Caskers Rewards.

Learn more
Size750mL Proof103 (51.5% ABV) *Please note that the ABV of this bottle may vary
Distributed exclusively in Japan by Takara, Blanton's Takara Gold Edition Bourbon is one of the most sought-after expressions among whisky aficionados. Aged for at least 8 years, which is two years more than the requirement for the standard Gold variety.
Notify me when this product is back in stock. 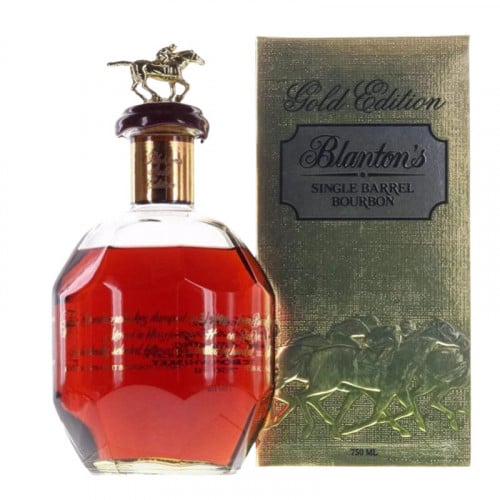 Distributed exclusively in Japan by Takara, Blanton's Takara Gold Edition Bourbon is one of the most sought-after and limited expressions on the market. This bourbon is aged for at least 8 years, which is two years more than the requirement for the standard Gold variety. Smooth and exceptionally complex, this sublime bourbon is bottled at 103 proof and comes in a luxurious gold box, equipped with dark red wax surrounding the stopper, which separates it from the standard gold versions.

Much like his mentor, E.H. Taylor, Blanton was a traditional bourbon aristocrat, wedded to the production of Kentucky straight bourbon whiskey. Blanton identified a certain section of Warehouse H at his distillery, which he believed was the best for aging bourbon, and would personally select individual barrels from the section to bottle for his own private reserve.
Explore all Blanton's bottles >>

This complex, refined and elegant bourbon greets with a slightly spicy and nutty nose. The palate is well-rounded with flavors of caramel, vanilla, honey, and corn. The finish is sweet and long-lasting with a touch of cinnamon.