Rating:
57%
2
Size750mL Proof90 (45% ABV)
This special limited-edition release of the collaboration between rock megastars Metallica, and legendary Master Distiller Dave Pickerell comes in a specialty box commemorating the release of the band's S&M2 album.
Notify me when this product is back in stock. 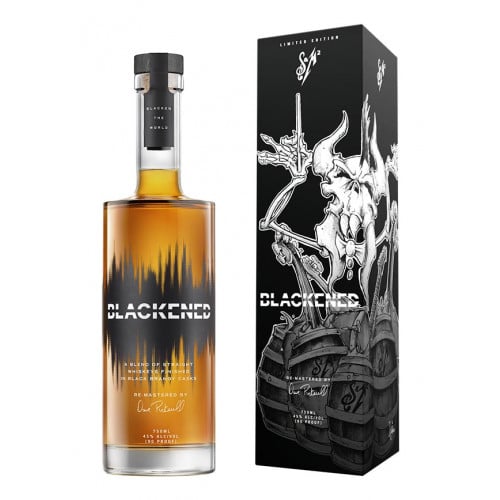 The behemoths of rock Metallica present Blackened American Whiskey, a blend of bourbon and rye whiskeys with an emphasis on the former. It was carefully selected by the late Master Distiller Dave Pickerell of WhistlePig fame, who is considered the founding father of craft distilling. Ever since he was a West Point student and later chemistry professor, Dave was interested in how sound could affect substances on a molecular level. They teamed up with Metallica and their long-time collaborators ― the innovating sound-engineering wizards Meyer Sound ― to create a special subwoofer that would transfer vibrations efficiently through the casks. They dubbed this proprietary process BLACK NOISE™, trademarked it, then proceeded to play tracks by Metallica ― chosen specifically for each batch by the band themselves ― to the whiskey.

The vibration helps each drop of liquid seep deeper into the wood, extracting flavors in the process, one heavy riff at a time. The result is a perfect balance of sweetness and rye spice, with additional fruity notes that come from finishing in black brandy casks. It's aged for more than 8 years and bottled at 90 proof. A Gold medal at the 2020 San Francisco World Spirits Competition is proof that the innovative approach has paid off.

The Blackened S&M2 Limited Edition whiskey commemorates the release of Metallica's second double album to feature an accompanying symphonic orchestra — S&M2. Recorded in collaboration with the San Francisco Symphony in 2019, it's a follow-up to their 1999 smash-hit S&M album. This special release comes in a specialty box with a design by the artist Squindo.

Get this limited-edition metal whiskey today!

Contrary to its origin, the profile is incredibly smooth and delicate. There are notes of caramel, honey, and oak on the nose that give way to more honey, cinnamon, allspice, mint, and apricot on the palate. Finishes long and smooth, as well as creamy and sweet.

2.9 out of 5
(2 reviews)
Write a review
Real email address is required to social networks
Sign in
Login with Google
Login with Facebook
Or
We also recommend