Size750mL Proof95 (47.5% ABV)
This rye whiskey comes from the Stein Distillery, a craft operation that is based in Oregon. With all the grain coming directly from the Stein homestead, it's a premium rye expression that's bottled at 95 proof. 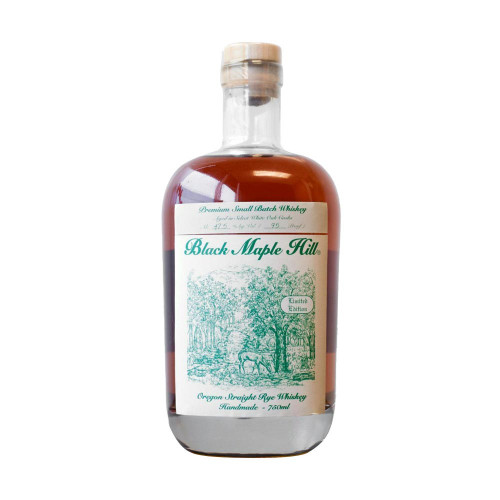 A widely popular and sought-after name among bourbon aficionados, Black Maple Hill Small Batch Straight Bourbon Whiskey is a golden amber bourbon that greets with a wonderful nose of orange citrus, hints of corn and honey aromas. The palate is well-balanced and complex with rye spices shining through in the background. Bottled at a pleasant 95 proof, the finish is smooth and silky.

First introduced in 2000, The Black Maple Hill brand is produced by CVI Brands, a non-distiller, spirits importer, and bottler from San Carlos, California. At the beginning, their releases were said to be sourced from the Stitzel-Weller distillery before moving to Kentucky Bourbon Distillers. Due to its increasing popularity, the stocks began to dry up and a new source was desperately needed. Today, the highly sought-after whiskeys come from Stein Distillery, an Oregon-based craft distillery famous for its aged whiskeys. All of the grain comes from the Stein homestead except the corn, which is sourced from a cousin up the road in Hermiston. It's no different with the premium Black Maple Hill Oregon Straight Rye expression that's bottled at 95 proof with no age statement.

Get your bottle of this premium rye whiskey today!

You can expect aromas of rye bread, dried fruit, nuts, oak, and spice. On the palate, there's a sweetness with maple syrup, nutmeg, nuts, and oak spice. The finish is medium and warming with oak, brown sugar, and spice notes.